Unable to make the long trip down to Exeter? The Alex have you covered…

The Alex make the trip to league leaders Exeter City off the back of a frustrating 1-0 defeat to Cambridge on Tuesday night.

Dave Artell's boys huffed & puffed in the second half against The U's, but failed to make the all-important breakthrough.

On the flip-side, Exeter were struggling at Barnet losing 1-0, but showed the character and endeavour that has defined their season so far to win 2-1, including netting the winner on 90+4 minutes.

Artell has great admiration for the project going on at St James Park, and will also want revenge on Paul Tisdale's side for the 4-0 thrashing handed out to the Alex gaffer in his opening month as a Manager last season. 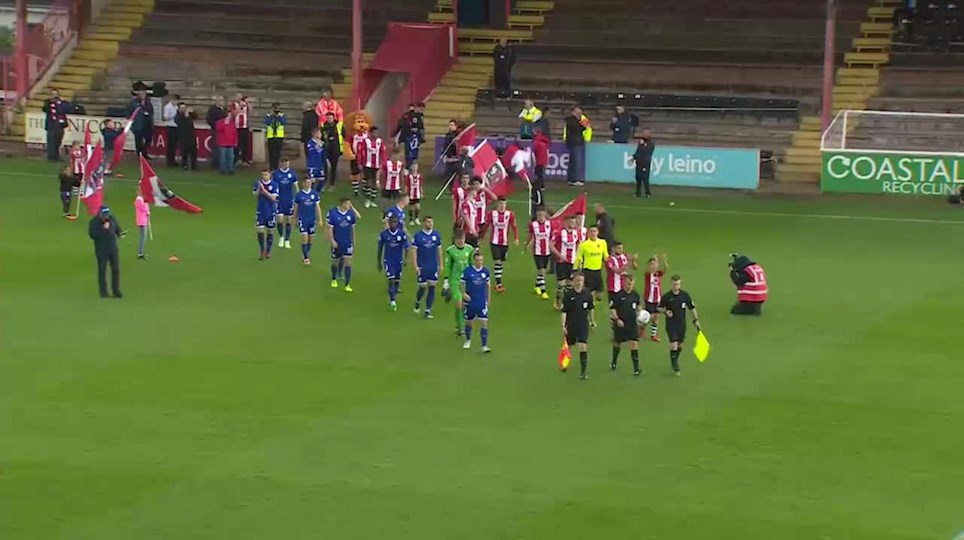 Crewe Alexandra suffered back-to-back defeats after league leaders Exeter City inflicted a 3-0 defeat at St. James Park. The Grecians deserved their victory thanks to goals from Jordan Tillson, Jake Taylor and substitute Jayden Stockley and Crewe were up against a very confident side following Tillson’s opening goal as early as the seventh minute.

Perry Ng was ruled out with a slight ankle injury meaning that boss David Artell had to reshape his defence for the trip to the league leaders. The versatile Brad Walker started at right back and Callum Ainley, who was so impressive as a second half substitute against Cambridge United on Tuesday evening, regained a starting position in midfield.  The one space on the Crewe Alexandra bench went to young forward Lewis Reilly.

Crewe Alexandra actually started on the front foot at St James’ Park and after Chris Dagnall had a shot blocked in the opening minute, the Railwaymen had a great opportunity to take the lead inside the opening two minutes of play. Defender Michael Raynes took a quick free-kick to release Zoumana Bakayogo down the left hand side and his low cross into a crowded box, saw Chris Porter create a chance for George Cooper, but the winger wrapped his foot around his shot to send it over Christy Pym’s crossbar.

After such a positive start to the game, it was immensely disappointing that the Alex conceded from the home side’s first real attack on seven minutes. After Lee Holmes had his shot deflected behind for a corner by Eddie Nolan, Crewe didn’t defend the set-piece well enough.

After being headed back into the danger zone, Crewe failed to defend it adequately enough and Troy Brown managed to poke a shot towards goal. Garratt made a brave save to deny him but Jordan Tillson was handily placed to guide the rebound into an empty net.

The early goal only enhanced the growing confidence in the Exeter camp and Crewe had to stand firm to deal with some dangerous crosses going in from the former England Youth International Holmes.

On 22 minutes, Holmes managed to shrug off the intentions of Bakayogo and play in McAlinden but his rather tame shot was straight at Garratt. Almost immediately, Crewe broke up the other end and a decent cross from Bakayogo, nearly found Porter inside the six yard box.

Holmes continued to cause us aggravation when operating in between the lines and he drifted inside again to find Reid, but Garratt made a strong one handed save to deny him and Walker put it behind for a corner.

Crewe continued to play some neat possession football but we were finding it more difficult to penetrate the Exeter back line. A rampaging run from Walker just after the half an hour mark saw him reach the by-line and force a corner off of goalkeeper Pym.

Nolan did well to deny McAlinden a clear run at goal, but in attempting to clear the danger the Irishman lunged in to a mistimed tackle to become the first player to be booked.

Exeter doubled their lead on 37 minutes and from a Crewe perspective it was far too easy. Reid’s little lay-off found McAlinden in space down the left hand side of our box and his miss firing shot travelled right across our six yard box to find Jake Taylor for the simplest of tap ins.

Taylor was denied his second goal of the afternoon after his goalbound header had beaten Garratt but the covering Nolan did exceedingly well to hook it from the line.

As we approached the half-time interval, Crewe continued to have a fair share of the possession but couldn’t find enough quality in the final third to really test Pym.

In stoppage time, after some perseverance from Reid to wrestle possession back into Exeter’s favour, he laid off a chance for McAlinden, but he couldn’t keep his shot from 25 yards out down enough to force Garratt into a meaningful save.

Exeter had an early opportunity from a corner, but Jordan Moore-Taylor could not direct his free header on target to trouble Garratt.

Walker became the second Crewe player to be booked after Holmes had pushed the ball past him. On 53 minutes, Crewe were nearly caught out by a punt up field from Pym. His long clearance picked out the advanced full-back Pierce Sweeney and his shot on the half volley just cleared Garratt’s far post. In fairness, the Alex goalkeeper had manoeuvred himself to cover.

At the other end of the pitch, Raynes won a duel to head on goal but it lacked the power to test Pym.

More good attacking play from Holmes saw him cut inside and curl a shot just over the Crewe crossbar.

With half an hour remaining, Crewe needed to conjure up some genuine chances of our own because halving the deficit at that stage could have made it far more interesting as a contest. Tom Lowery found Cooper in space but his dinked shot was off target from just over 20 yards out. Moments later, Walker advanced up the pitch to shoot over. It was his last involvement as he made way for debutant Sam Stubbs. Eddie Nolan moved to right back.

Reid showed good strength up against Stubbs to find Taylor but Garratt was well placed to grasp his shot from just inside the penalty area.

With 18 minutes left on the clock, Dagnall dragged his cross just beyond Ainley and those two players were soon making way for Jordan Bowery and Owen Dale.

Reid also made way for Jayden Stockley and the substitute soon added his name to the scoresheet in the 76th minute. The substitute got across his man to get a decisive touch to Taylor’s cross to give Garratt little chance of saving it.

After the third goal, Tisdale made another change with Hiram Boateng replacing McAlinden.

Dale was booked to become the third Crewe player to be cautioned and he was unlucky not to have won a penalty in the closing stages when he appeared to be impeded as he tried to reach a cross at the far post. The referee waved away the youngster's appeal. Wintle also shot over as Crewe looked for a late consolation goal.

With the comfort of their 3-0 lead, Tisdale’s impressive side went in search of more goals but Garratt pushed away a dangerous cross from Holmes and Boateng had a shot blocked by Raines.

In stoppage time, after Dale was chopped down brutually on the egde of the box, Cooper sent his free-kick just over.

Tickets for Crewe Alexandra's away trip to Exeter City are now on sale from The Alexandra Stadium.

Dave Artell takes his side to The Grecians in Sky Bet League Two action, looking to set the record straight after February's 4-0 defeat.

The match takes place at St James Park on Saturday 16 September, with a 3pm kick-off.

Official coaches depart at 8:15am and are priced at: