Crewe host Cambridge hoping to make it back-to-back home victories in the space of four days after Saturday's rampant 5-1 demolition of Chesterfield.

The U's have had a tight defence this season, conceding just six goals in their six League Two games so far, with three of those coming in Saturday's defeat to Barnet.

Former Gresty Road favourite Uche Ikpeazu returns with the U's this evening, and he always seems to find his form against The Alex, notching in Cambridge's 2-1 victory at the Cambs Glass Stadium in December.

Tonight's visitors won both fixtures 2-1 last season, and Dave Artell will be dead-set on bucking that trend tonight as Crewe look to continue the positive start to the campaign that has merited a return of three wins, two draws & one defeat from the first six.

The best way to take in the game is obviously by making the trip to the stadium to watch in person, but if you can't make it, there are several other ways you can stay in touch...


What the press made of the U's defeat 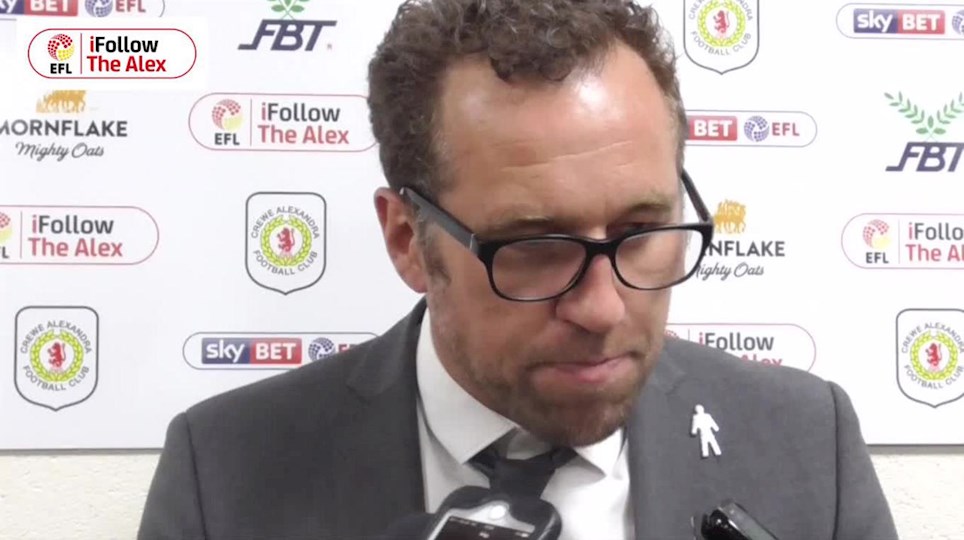 Crewe Alexandra’s unbeaten home record in League Two went this evening as Shaun Derry’s Cambridge United did a job on us to earn a 1-0 win. The U’s scored the only goal in the 35rd minute with Jabo Ibehre slotting home a rebound off Ben Garratt after Uche Ikpeazu saw his initial shot saved.

Crewe vastly improved in the second period but we couldn’t take advantage of our superior possession. The Alex were certainly the better side in the second half, but we didn’t test David Forde in the Cambridge United goal enough. David Artell could not have asked much more in terms of effort but we couldn’t find that real quality ball into the penalty area to really present Porter or Dagnall with that genuine chance.

Following the emphatic 5-1 win over Chesterfield on Saturday, David Artell understandably named an unchanged squad for the visit of Cambridge United this evening. The Crewe boss again went with an attack-minded forward three of Chris Porter, Chris Dagnall and George Cooper.

A confident Crewe actually started brightly in the Cheshire drizzle but we never troubled the experienced David Forde on enough occasions.

Ikpeazu was a physical handful and he so nearly reached a low cross before the busy Piero Mingoia won a free-kick some 25 yards from the Crewe goal, but his teammate Jevani Brown wasted the opportunity by sailing it over the crossbar.

Cooper’s first real involvement in the game saw him produce a teasing cross from the left hand side, but Forde did exceeding well to punch it clear ahead of the lurking Porter.

Cambridge began to take control of the game with the impressive Gary Deegan, Mingoia and George Maris shading the crucial midfield area in the first half. Maris had a firm shot blocked from just inside the Crewe penalty area before Ikpeazu headed wide of the target.

Crewe tried to mount some pressure but a low cross from Walker and another from Dagnall was cleared by Maris. There was also a loud shot for a penalty when it appeared that Ikpeazu had handled the ball. The Crewe players certainly stopped in their tracks and appealed to referee Sailsbury.

After Brown had shot straight at Garratt through a crowd of players, the Crewe goalkeeper produced a fine save to deny his former teammate Ikpeazu on 33 minutes. He had rose highest to head towards the top left hand corner but the agile Crewe stopper got a hand to it to concede only a corner.Ng had been covering on his line for him.

More pressure from the U’s saw an impressive Mingoia drive a shot over the top of the crossbar and the Crewe crowd were getting nderstandably anxious.

Cambridge, who had been on the front foot for a while, deservedly took the lead on 35 minutes. Ikpeazu used his frame to spin and snap a shot and Garratt could only parry it out and Ibehre was there to tuck the rebound home. The Crewe defence were flat-footed with the more alert Ibehre taking full advantage.

The Railwaymen stepped up a gear and could have hit back before the half-time interval. A burst from Lowery nearly saw him reach a searching ball from Cooper before defender Eddie Nolan saw a looping header hit the woodwork after Forde failed to get any distance on another punch. Cambridge managed to clear the danger.

After the powerful Ikpeazu headed over following another corner, Crewe conjured up their best chance of the half in the final minute. Perry Ng did well to release Dagnall down the right hand side and he in turn found Lowery. The midfielder drilled a shot goalwards and there was a mass scramble close to the goalline but Forde managed to dive on the loose ball before Porter could smuggle it home.

Crewe came out a much improved outfit in the second half but we continued to get into promising wide areas but that our crosses were too close to Forde or the head of the excellent Leon Legge. The captain was exceptional and you had to credit the way Cambridge defended their goal.

A cross from Cooper nearly reached Porter before Artell decided to freshen things up with Callum Ainley replacing Lowery. Ainley was eager to get on the ball and make things happen. He excelled and quickly won a corner after drifting past Brad Halliday.

Legge stood firm again to cut out a dangerous cross from Bakayogo, who was getting an awful lot of the ball from the left back position. Crewe’s pressure continued as did the corners but we didn’t take advantage of it enough.

Derry chose to compress his midfield and use Ikpeazu as his lone striker. It frustrated Crewe and Artell’s last throw of the dice saw Bowery replace Ng, as we went to three at the back for the final 20 minutes.

Ainley, who was lively with his skill and willingness, drilled a shot into the arms of Forde before Bakayogo shot straight at the Cambridge goalkeeper after a looping deflection from Cooper found him in space.

We continued to produce crosses into the Cambridge box but they continued to defend them with great efficiently. Cooper produced a cross that Porter reached but he continued quite direct it on target.

Cambridge nearly nicked a late second goal with Ikpeazu pinching the ball from Wintle, but his tame shot was straight at Garratt.

A late low cross from Ainley evaded everyone before Dagnall flicked a late cross from Cooper across the six-yard box.

Crewe kept going and gave their all but couldn’t find that equaliser that our dominance in the second half arguably deserved.


What the press made of the U's defeat

Come and behind David Artell and his in-form Crewe Alexandra side on Tuesday night, as they look to follow up Saturday’s emphatic 5-1 win over Chesterfield with another three points against Cambridge United.

Saturday’s 5-1 win puts Crewe fourth in the table and another three points would set us up nicely for a trip to league leaders Exeter City on Saturday.

Come and get behind the Alex…