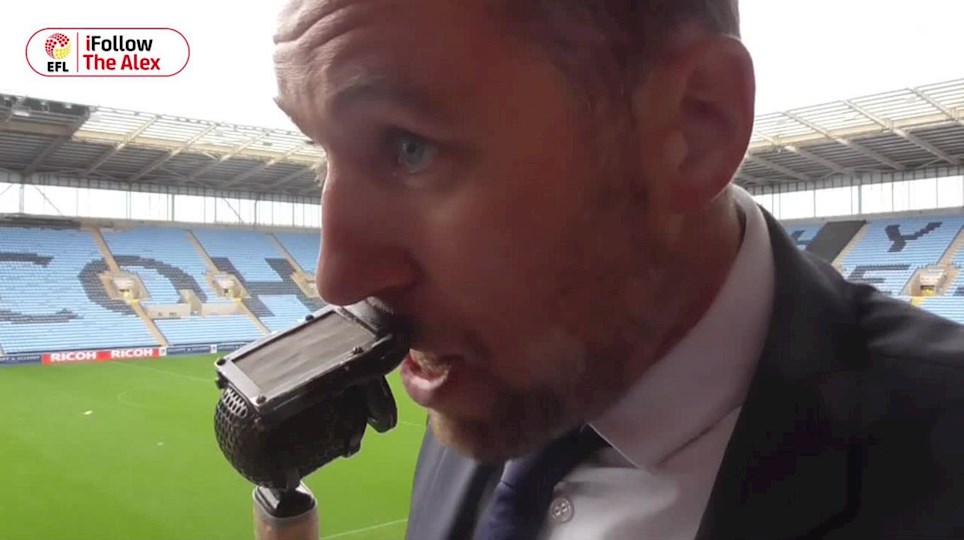 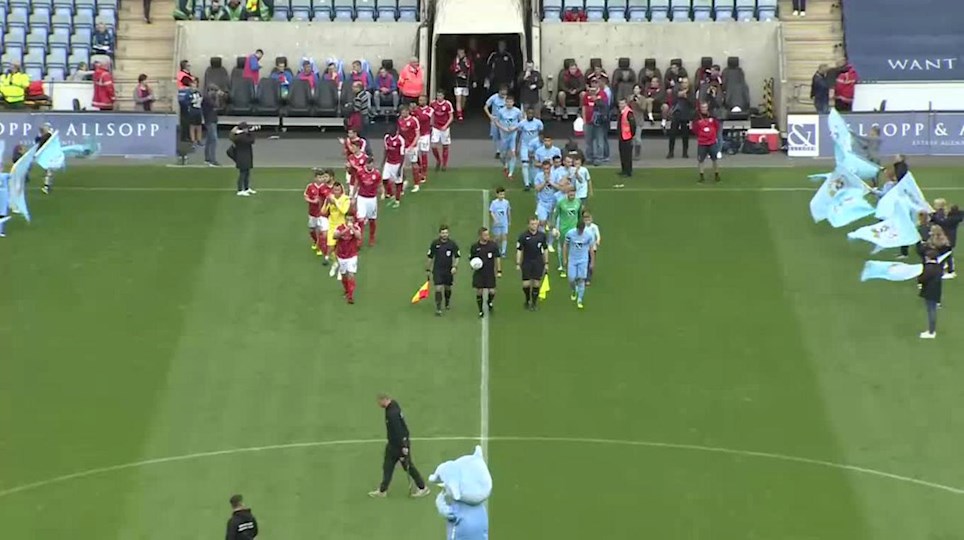 When your luck is out it is well and truly out. Crewe Alexandra suffered their fifth successive defeat at the Ricoh Arena this afternoon but in-form Coventry City needed a large chunk of good fortune in scoring the only goal of the game. Minutes after Chris Porter had gone close for Crewe Alexandra at one end, a clearance from Zoumana Bakayogo hit Jodi Jones and looked to be heading out of play.

The Sky Blues certainly received the rub of the green as the deflection struck the corner flag and rebounded perfectly into Jones’ path on the by-line. He cut the ball back for Duckens Nazon and his shot deflected past debutant Dave Richards for the winning goal in the 10th minute.

Crewe did have their fair share of possession in the contest and went close to an equaliser when a Brad Walker free-kick hit the top of the Coventry crossbar.

Crewe Alexandra boss David Artell made one change for the visit to the Ricoh Arena with Dave Richards replacing regular number one Ben Garratt in goal. Richards, 23, was handed his senior debut in football after being a regular for the club’s Under-23 side over the last couple of seasons.

The change ended Ben Garratt’s run of 114 successive matches in goal for Crewe Alexandra. He last had a spell out of the side when suffering a broken leg in February 2015.

Crewe forced an early corner on the right hand side of the pitch but the delivery was too over hit and cleared everyone until Michael Doyle was able to clear.

A really promising passage of play in the fourth minute created the first genuine chance of the game. Zoumana Bakayogo, Jordan Bowery and Tom Lowery retained possession well in the left channel before the ball was played into Chris Porter. His touch allowed Chris Dagnall to get a shot off but he rather scuffed it. Porter spun in an instant though to fire just wide of Lee Burge’s left hand post.

As has been happening of late, Crewe have made a bright start to games, but have conceded early. On this occasion the Railwaymen were unbelievably unlucky to concede in the 10th minute.

Zoumana Bakayogo hit the ball off winger Jodi Jones looking for a goal kick or throw-in in our favour, but the ball hit the corner flag and remained in play. Jones took full advantage to race down the by-line and had time to pick out Duckens Nazon. His shot took a deflection to wrong foot Richards as well.

The tricky teenger Jones went close to doubling the home side’s advantage after his curling shot struck the Crewe crossbar before bouncing to relative safety.  Nazon also volleyed over after fancying his chances at the ball dropped invitingly for him on the edge of the penalty area.

Crewe tried to response and Perry Ng’s wicked delivery from right-back only needed Dagnall or Bowery to apply a decisive touch as it fizzed across the six yard box.

Artell’s men continued to enjoy a fair amount of possession on a dampening surface and there wasn’t much between the two sides as we approached the half-time interval. Crewe had some promising play in the final third but we just lacked that last moment of quality to truly get behind the Sky Blues backline.

David Artell made a change at the break with George Cooper replacing Callum Ainley. Lowery was cautioned within seconds of the restart as Coventry threatened to hit us on a break. The busy Dagnall tried to square an early cross but Burge was well placed to cut it out before it caused major problems.

The home side’s first effort of the second half saw Max Biamou overhead kick a cross from full-back Jack Grimmer but Richards did well to get down and turn it behind for a corner.

From a Crewe corner won superbly well by Bowery down the left hand side, Raynes couldn’t quite reach a bouncing ball in a melee and Burge reacted positively to snatch it in his grasp.

Crewe continued to have good periods of possession in the Coventry half of the pitch and Burge was called upon again to dive on another dangerous cross from Dagnall.

On 68 minutes, Cooper thought he had won a handball inside the box as Doyle went over to cover. Cooper flicked it over the Coventry captain and was adamant that the infringement had occurred inside the box but referee David Webb awarded it just outside. From the resultant free-kick, Brad Walker fired in a powerful drive that clipped the crossbar on its way over.

With 20 minutes left, Mark Robins replaced Biamou with a fit-again Stuart Beavon. Moments later a swift break from the Sky Blues gave Nazon another sight of the Crewe goal but Richards stood up well to deflect it behind for a corner.

The Crewe goalkeeper then produced a wonderful double save to keep us in the game. He smartly had to get down to push Beavon’s long- range shot away and then he responded brilliantly to get up and deny Nazon a simple tap-in. At first, Richards did not appear the favourite to get to the ball.

With 13 minutes remaining, Artell made a double substitution with Kirk and Grant replacing Bowery and Walker.

Nolan made a smart block to deny Nazon a shot on target before from the corner, the Coventry striker could only divert his close range header wide of the target.

With 10 minutes remaining, Jodi Jones took on Ng before firing goalwards but yet again Richards was equal to it to produce a strong hand to keep it out. The Alex defence stood firm to deny Nazon with the rebound.

The game was evenly poised going into the final minutes with both sides aiming to grab the next goal. Jones was booked for dissent after he complained too long over a shot he thought had taken a deflection for a Coventry corner.

Crewe huffed and puffed but found a stubborn Coventry defence tough to break down, although a late cross from Kirk nearly found a Crewe head in front of Burge’s goal.

Jones had a late chance to seal it after a burst at the death but he shot straight at Richards, who was very impressive on his full debut.

Coaches depart at 10.30am and are priced at

Away supporters visiting the Ricoh Arena are located in the South Stand - this is behind the goal. This is a dedicated stand for away fans, with separate turnstiles and concourse.

The allocation of tickets given to away clubs varies, depending on demand and police/safety advice.

Turnstiles open from 1:30pm. Tickets are available on the gate (cash only) unless the game is an all-ticket match for away fans - please check your own club website for details.

We operate ticket barcode scanners on entry, so please make sure you have your ticket ready and it is in good condition

For fans travelling by car from the South, we advise using the M1 and joining the M6 at the Catthorpe Interchange and leaving the motorway at Junction 3 before joining the A444 (South).

Coventry is on the main line between London and Birmingham.

Coventry train station is located in Coventry city centre, around 4 miles from the Ricoh Arena.

There is an on-site train station at the Ricoh Arena - 'Coventry Arena'. There is no special matchday schedule, and trains run as timetabled.

On street car parking within 2km vicinity of the Ricoh Arena on matchdays is for permit holders only.

If you are a fan arranging coach parking from an away club, please contact the Ricoh Arena on Daniel.Salotra@Apcoa.com or Kevin.phillips@apcoa.com regarding arrangements, availability and prices.

Coventry City do allow flags in both the away end, provided prior permission from the club is sought by the supporter. Fans are required to contact the club’s safety officer Chris O’Neill via e-mail on: chris.oneill@ccfc.co.uk. Please send the fire safety certificate for your flag attached to your e-mail, along with the dimensions of your flag, photo of your flag, details of any poles which are attached to the flag, location where you will be sat/where the flag would be displayed, and contact telephone number.

The club reserve the right to ban, or refuse entry to any flag/banner considered to be offensive, discriminatory, insulting, or carry any inappropriate/commercial language or message. Any flags or banners not pre advised and approved may be confiscated and returned after the game.

We will always try to accommodate flags/banners supporting the team to make the matchday experience better but in accordance with regulations above.

Tickets for disabled supporters are available from the visiting club, and are priced at the age relevant price with the carer (if required) going free of charge.

Wheelchairs are located at the front of Block 8 in the South Stand, with stewards dedicated to this area.

If you are a disabled badge holder, please contact Daniel.Salotra@Apcoa.com or Kevin.phillips@apcoa.com for availability and prices of car parking

Food and Drink (soft drinks and alcohol) is available within the South Stand concourse from 1:30pm. Card payments are accepted.

Our matchday programme PUSB is priced £3 for league games and is available around the ground - this includes an extensive visitors section.