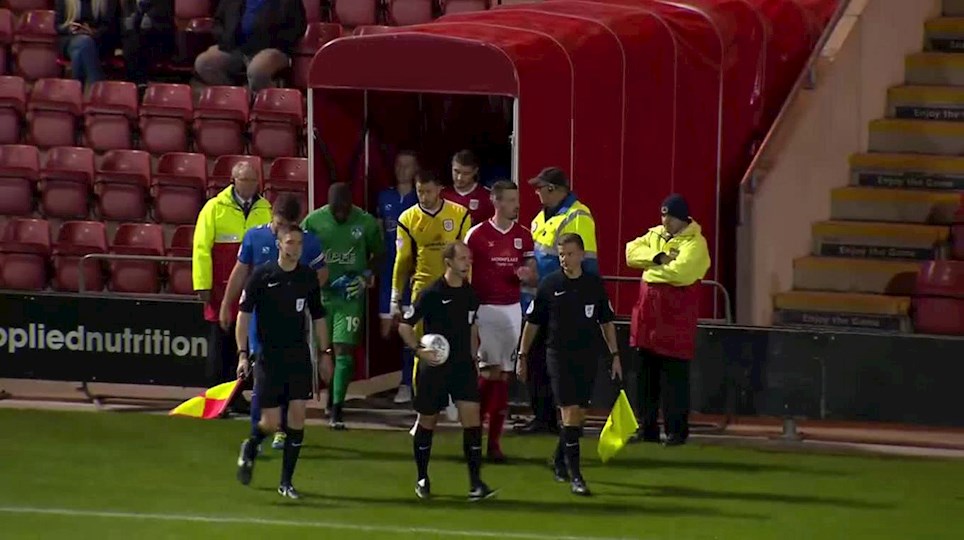 Artell: "Response Was Better After The Break"

Crewe Alexandra’s tough time of late continued with a 1-0 defeat at the hands of League One Oldham in the Checkatrade Trophy. Crewe exited the competition with a trip to Vale Park still to come in Group D.

Oldham's interim boss Richie Wellens named a strong line-up for the trip to the Alexandra Stadium and their dominance in the first half resulted in the only goal of the game coming from Jack Byrne’s wonderful strike three minutes before half-time.

Crewe greatly improved in the second period and Michael Raynes had a header cleared off the line and Jordan Bowery had a late chance to perhaps extend it to a penalty shoot-out and keep our cup hopes alive.

David Artell made three changes to the side that narrowly lost 1-0 to Coventry City on Saturday. George Cooper and Charlie Kirk returned to the starting line-up and there was a first start for the on-loan defender Sam Stubbs.  Eddie Nolan was rested.

David Richards, who made his debut for the club at Coventry at the weekend, retained his place. Ben Garratt was named on the substitutes’ bench alongside Chris Dagnall. The captain’s armband went to Michael Raynes.

The game started slow and much of the play was in the centre of the pitch. There were still progressive spells of good possession from both sides. Brad Walker and George Cooper had early chances to deliver quality into a crowded Oldham penalty area, but the Latics defence stood firm and cleared any ensuing danger.

The first major opportunity arrived in the 20th minute with Eoin Doyle stealing space between the Crewe backline and Richards stood up well to make a wonderful save and sent it over the crossbar.

The impressive Jack Byrne released Doyle in behind again and Richards made another smart save to tip it around the far post.

Crewe Alexandra and especially Chris Porter felt awfully aggrieved that a penalty wasn’t given when it appeared that Porter had his shirt pulled just as he was about to head a Kirk cross towards the goal. Porter was penalised for handball but only after he had been fouled. David Artell was quickly incensed on the touchline.

Cooper then whistled one over from long range before Porter was rather ironically booked for a shirt pull on defender Kean Bryan. The two of them had been competitive all evening and both had been giving out as good as they got. It seemed harsh.

The lively Porter was then tripped on the edge of the penalty area by Ousmane Fane but Cooper’s shot was too central to trouble Johnny Placide in the Oldham Athletic goal.

On 37 minutes, Queensy Menig went on a positive run down the Crewe right hand side and after he had made his way into the box, his lifted shot had to be collected at his near post by the well positioned Richards. The Crewe goalkeeper was looking assured on only his second start for the club.

After being booked for dissent, Byrne fired the visitors into the lead on 42 minutes. Menig was involved again from the left wing and his delivery into the box found Doyle. The Irishman had enough awareness to get the ball under control and wait for sufficient support from Byrne. He got the ball out of his feet before unleashing a powerful drive into Richards’ top corner. It was a sublime shot that gave Richards no chance and it was no more than the impressive visitors deserved over the play.

Crewe tried to respond before the interval but after good work from Jordan Bowery, Tom Lowery couldn’t keep his shot from the edge of the box down enough and as we entered injury time, Anthony Gerrard was lucky to escape a slip as Porter threatened to get in behind the Latics defence.

The second half started with the dangerous Menig shooting wide after he tricked his way past Bakayogo before Cooper's attempted chip was too close to Placide.

More good play from the Alex saw Lowery draw a save from the Oldham goalkeeper after a melee at his near post. A progressive run from Bakayogo saw his low cross cut out by Oldham’s skipper Gerrard as Crewe began to have a real go.

Cooper also lifted a cross that was too high for Porter at the far post.

A change saw Ainley replace Kirk and some good play from the substitute off the touchline allowed the supportive Perry Ng to have his low shot blocked and deflected behind for a corner. It was much better from the Alex.

The impressive Dan Gardner, formerly of Crewe Alexandra, and Byrne continued to press the midfield and Richards was called upon to make a smart save from Menig after Garnder was presented possession from a wayward Lowery pass. Full-back Rob Hunt also shot just wide after being set up by Doyle.

Stubbs was booked for a shirt pull before Walker dragged a shot from distance wide of the mark. Ainley started to make an impression and his shot was saved by the alert Placide.He also forced the busier Oldham into a push out after he had been put in by Bowery.

Crewe gave it a go in the closing stages and nearly forced a penalty shoot-out but Raynes saw his header from an Ainley corner cleared from the line before both Dagnall and Bowery were denied by the agile Oldham keeper in the final minute. The Oldham stopper threw himself infront of both strikers.

Oldham, who impressively passed the ball around and always presented a threat in the final third with Doyle and later substitute Tupe Obadeyi.

Doyle went down inside the box late on but there was no suggestion of a penalty after Raynes came across to cover the danger.

Artell: "Response Was Better After The Break"

Crewe need to beat the Latics to keep their hopes of qualifying from Group D alive after a narrow 2-1 defeat in the opening game against Newcastle United Under-21s.

The latics picked up one point for a draw in their opening game with Port Vale, but the Valiants took away the extra bonus point with a penalty shoot-out win.