Accrington Stanley come to Gresty Road off the back of a last gasp 3-2 defeat to Stevenage in midweek, but impressively defeated Coventry City 1-0 last weekend.

Stanley are riding high in fifth place in the Sky Bet League Two currently after a strong start to the season that has seen them win eight of their 14 games.

After recovering from a difficult period, Crewe have won two of the last three games at home to Stevenage & Notts County, with the defeat in-between at Yeovil still represeting a decent performance without the result.

Those two home wins have also represented much needed clean sheets for the Alex backline, and boss Dave Artell will be hoping for more of the same this weekend.

The best way to take in the game is of course in person at the stadium, but if you can't make it, there's plenty of ways to keep in touch with the match as outlined below. 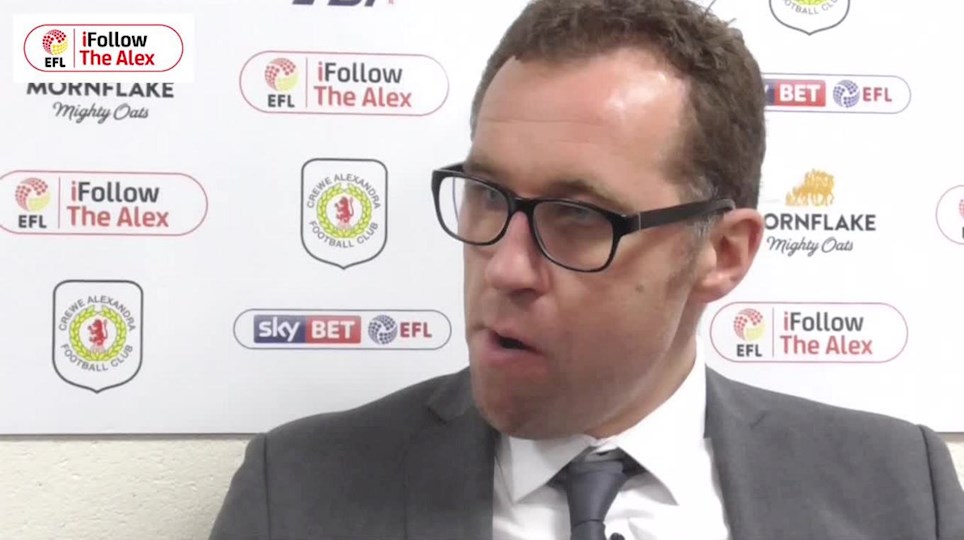 Crewe Alexandra failed to build on a fantastic display against Notts County on Tuesday night as Accrington Stanley inflicted a 2-0 home defeat. John Coleman’s side were quick out of the blocks to lead 2-0 inside the opening ten minutes thanks to a well struck penalty from Billy Kee before winger Jordan Clark nodded home a rebound off the gloves of Dave Richards to make it an uphill task for David Artell’s side.

Saying that Crewe conjured up enough chances, especially in the first half to have got something from the game. Chris Porter and Jordan Bowery both had good opportunities to get us back into the game but they failed to hit the target.

Accrington stood firm at the back, with Mark Hughes and the towering Ben Richards excellent at protecting their advantage in the second half.

To rub salt into the wounds, the Alex captain Michael Raynes was sent off for his second booking of the game with five minutes remaining. Raynes had been booked inside two minutes for conceding the penalty for a foul on Jackson.

Dagnall missed the Notts County match due to an Achilles tendon injury, but he had made sufficient improvements to declare himself fit. Therefore, it was a shame that he wasn’t allowed to come on over a dispute with the wrapping on his wedding ring finger! Youngster Josh Lundstram dropped out of the squad.

The former Crewe Alexandra midfielder Liam Nolan started for the visitors, who were also unchanged. Irishman Nolan, who was released by Crewe under previous boss Steve Davis was signed by Stanley in the summer after impressing at non-league Southport.

The players wore black armbands in remembrance of the sad passing of Accrington’s Academy youngster Jordan Moseley in mid-week. Both fans also acknowledged his death by conducting a one minute of warm applause on the 15th minute.

Boosted by Tuesday’s morale boosting win over the then league leaders, Crewe would have wanted to have made a bright start but found themselves behind inside the opening three minutes. Michael Raynes was caught out by the run of Kayden Jackson and his trip resulted in an early penalty. Raynes was cautioned for the offence and it would result in him later being sent off for a second yellow card late on.

The in-form Billy Kee stepped up to put Dave Richards the wrong way for his 10th goal of the season in all competitions.

Crewe tried to respond quickly and Chris Porter was denied an almost immediate equaliser but his poked shot went wide of the target. George Cooper also shot straight at Aaron Chapman in the Accrington goal.

Accrington’s in-form front two, Billy Kee and Kayden Jackson were also a threat with their movement early on. Kee got one out of his feet to see a curling shot from 25 yards deflected behind for a corner before he helped create the second goal on 10 minutes. He was slipped in behind on the Crewe left hand side and his firm drive across goal was pushed out by Richards and the supportive Jordan Clarke nodded home the rebound.

Accrington had scored from two of their opening three attacks and Crewe were facing a mountain to climb. To their credit, the Railwaymen enjoyed a fantastic spell of possession.

Bowery should have halved the deficit on 20 minutes when he was played in behind the Accrington Stanley back line but his final shot was wide of the target. Ainley also had a sight of the Stanley goal but Ben Richards did well to push him wide inside the box.

More pressure from Crewe saw Tom Lowery fire over from the edge of the box and a couple of low crosses from right-back Perry Ng were cut out inside the six-yard box.

A forceful run from Ng saw him carry the ball deep into the Accrington half of the pitch and he managed to squeeze it through to Porter but his low drive was just wide of the far post.

Crewe had certainly upped it a gear and Ng also had a shot deflected over the top of the crossbar before our former midfielder Nolan had a shot blocked by the onrushing Lowery.

Accrington could have stretched their lead to a third goal but Ng did his defending at the other end to deny winger Sean McConville. He got across to deflect it behind for a corner.

With five minutes of the first half remaining, a well struck free-kick from Conor Grant was headed over by Raynes and Accrington managed to see the half out without conceding.

The next goal was always going to be crucial and Crewe had to survive an early free-kick in the second period but they tamely hit the wall.

Conor Grant nearly found Porter’s run and Crewe needed to start to show some urgency but the inconsistency continued and we struggled to create genuine chances.

Hughes was booked for a foul on Porter before Richards cleared a deep free-kick from Cooper. The Accrington centre-half was excellent.

On the hour, there was a double substitution with Brad Walker and Harry Pickering replacing Zoumana Bakayogo and Grant.

Crewe forced a couple of corners and from one there was a loud shout for a penalty.

Artrell wanted to bring Dagnall on but wasn’t allowed to by the fourth official over a dispute over the wrapping around his fingers. It was bizarre and the referee refused to come over to discuss the matter.

Dagnall was changed and ready to go and was left in limbo on the touchline but it became clear that he would not be allowed to enter the field of play and youngster Owen Dale eventually replaced Ainley instead.

Accrington were well drilled and organised and the conditions were not helping. Crewe struggled to find those through balls and some of our crossing was too close to Chapman in goal or the head of Richards.

We did get some joy round the back and some good play involving Porter saw Cooper curl one into the gloves of the Accrington goalkeeper. Crewe huffed and puffed and were just falling short to get on the end of things.

Bowery hit a wonderful cross with the outside of his boot that only needed a touch from Porter and another from Pickering just evaded Porter and Dale coming in at the far post.

Crewe’s hopes of getting back into the game were ended when Raynes received his second yellow card of the game and was sent off for the first time in his Alex career. It looked  bit soft as he tussled some 30 yards from goal. With the surface very wet under foot, it looked more of a slip than anything malicious.

Lowery was also booked before Bowery arguably had our best chance of the second half in stoppage time. Walker found him at the far post with a well struck free-kick and Bowery’s firm shot forced Chapman into a rare save. He didn’t have too make many.

Can Crewe Alexandra build on a fantastic, morale boosting victory over Notts County by securing a third straight home win over Accrington Stanley this weekend?

Come and get behind Dave Artell and the boys as we host John Coleman’s Stanley side.