Unable to make the trip down to South Wales? The Alex have you covered…

Crewe Alexandra travel to Newport County AFC looking to continue the fine recent form that has merited ten points from the last 18 available - a steady run of three wins in six games.

That includes being unbeaten in the previous two away from home after victory at Lincoln and a draw at Stevenage.

County have won just one of their last 11 in all competions, but their last two games have included an impressive draw with Luton as well as the solitary victory over Yeovil.

The Exiles don't lose too many games though. They've drawn the second most amount of games in the League Two with 14 so far this season, including the 1-1 in the reverse fixture at Gresty Road in August.

With tickets slashed to just £5 per person, it's the perfect time to make an away trip to follow the Alex on the road! 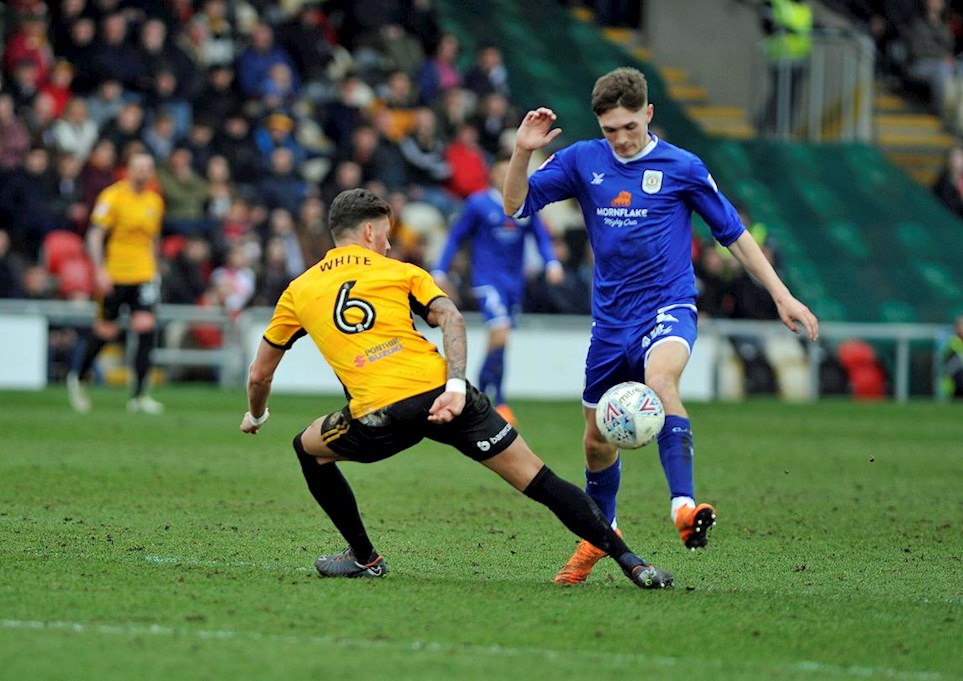 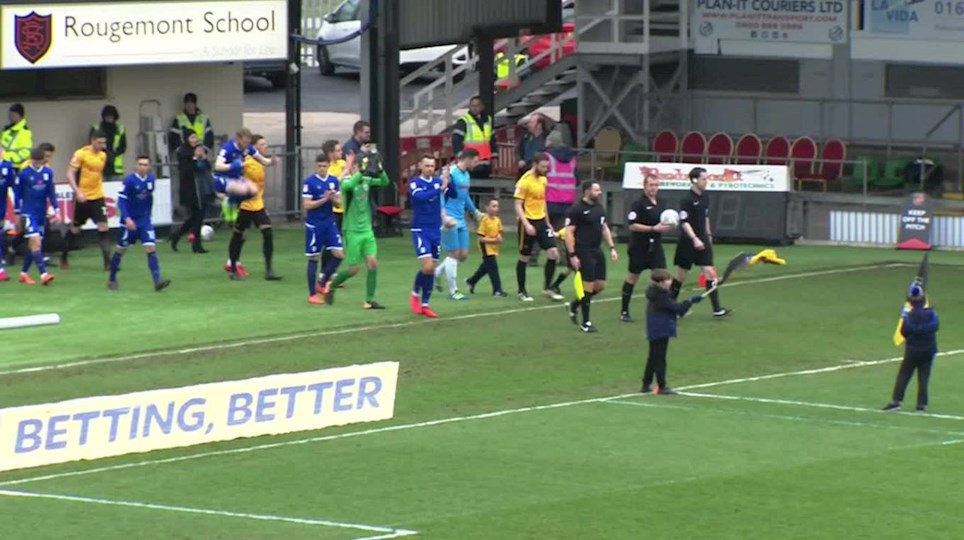 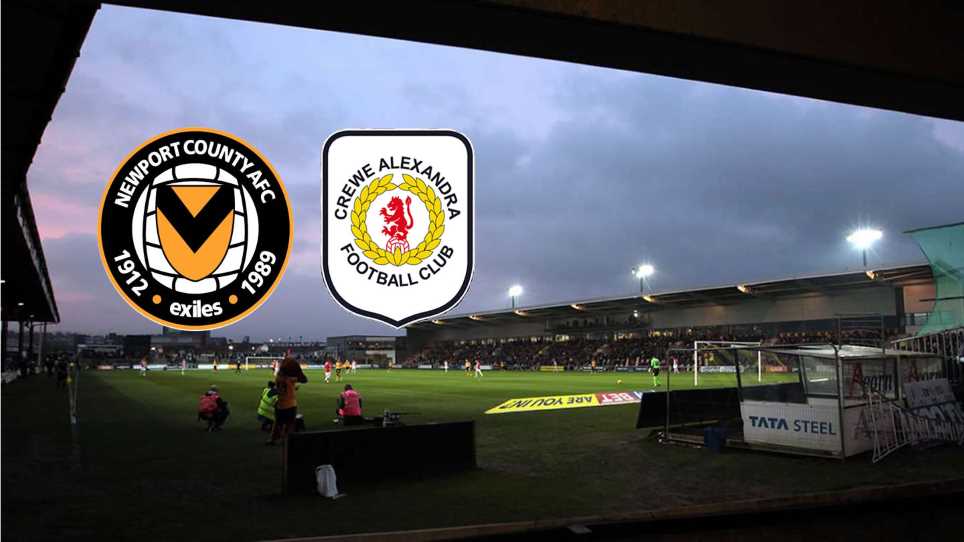 Crewe Alexandra’s front two, Harry McKirdy and Jordan Bowery helped themselves to a goal apiece as the Railwaymen secured back-to-back wins for the first time since August at Rodney Parade.

It was a really professional performance from the Alex, who defended our penalty area extremely well as Newport County tried to make their extra height count.

The bright McKirdy opened the scoring in the 26th minute with a moment of sublime skill that saw him lift the ball beyond his marker, before calmly slotting past Joe Day.

Bowery, who has now hit six goals in his past five games, tucked home a second goal on the hour mark after Charlie Kirk’s original effort had struck the post.

Newport, who continued to load our box with crosses and long throws from Ben Tozer, finally broke our resolve in the 81st minute when Mickey Demetriou headed home from a corner.

David Artell had the luxury of naming an unchanged team for the trip to South Wales. Everyone came through unscathed following our convincing 3-1 win against Forest Green Rovers on Tuesday evening, so it was same again. The game came around too quickly for the injured trio of Shaun Miller, Jamie Sterry and Zoumana Bakayogo.

There was a bonus appearance on the substitutes’ bench with the news that Ryan Wintle was fit enough to return to the squad. Wintle has not featured since January when he suffered an ankle ligament injury.

James Jones and Lewis Reilly were also included in the squad of eighteen.

As expected, Newport County always try to start with a high tempo and they quickly tried to get the ball forward and into the Crewe penalty area. An early long throw from Ben Tozer was cleared at the far post by George Ray and moments later Perry Ng stretched to pinch the ball from Josh Sheehan inside the box.

Some tenacious play from Sheehan won a free-kick from Ng some 20 yards from our goal but Robbie Willmott sent his effort harmlessly over our crossbar.

Crewe’s first venture forward saw Callum Ainley receive possession from a throw in but his whipped in cross was too close to the Newport goalkeeper Joe Day, who made a simple collection in his six yard box.

In the 10th minute, Lowery’s attempted back pass towards our own back four was a little short and for a moment it looked as though the alert Padraig Amond was going to take full advantage, but Eddie Nolan read the situation exceptionally well to make a timely sliding tackle on the Newport forward.

Newport were certainly having the better of the early exchanges and they were awarded another dangerous free-kick on the edge of the Crewe box. This time it was Lowery the offender with a trip, but his teammates stood tall in the wall to block Matty Dolan’s direct shot.

From a corner from the Crewe left, Tozer managed to create some space for himself close to the edge of the box but his header from a fair distance landed on top of the netting and Garratt had adjusted to have it covered.

Crewe Alexandra took some time to settle into their stride, but a promising burst from Kirk nearly saw him combine with Ainley. A flick from McKirdy didn’t quite come off inside the box but his next one did!

After good work from Pickering and Kirk down the left hand side, the on-loan Aston Villa forward was found inside the box and he showed great awareness and skill to flick the ball over his marker’s header before calmly slotting it beyond Day for his second goal for the club. It was a wonderful finish from McKirdy to give Crewe the lead after 26 minutes.

Nolan bravely headed another corner away as Newport tried to quickly draw themselves level. Ainley was having a growing influence on the game and after another forceful run, he was nudged just as he was about to shoot, but to his credit he kept on his feet, to poke an effort straight at Day. McKirdy was sniffing for any loose slippage from the Newport stopper.

From a rare corner of our own, Ray got a run on his marker but he couldn’t quite direct his header on goal.

Newport stepped up their attacking intent again to force a number of corners but Ray and Nolan were excellent in their defensive duties.

With five minutes of the first half remaining, a promising run from Green saw him carry possession into the Newport box. The former Eire International cleverly produced a turn to create himself a yard of space on full-back Dan Butler, but his curling effort drifted just wide of the far post.

Newport’s best effort of the first period came via another free-kick. It was whipped in by Willmott into a crowded box and the Newport captain Mark O’Brien got a decisive touch on it but his header cleared the left hand post.

At the half time interval, Crewe made a change with James Jones replacing Lowery for his first appearance of the season. The Scotland Under-21 International received warm applause from the traveling fans after over 10 months out of action.

Newport were awarded an early free-kick after Nolan had felled Dolan. The midfielder dusted himself down to take it but Bowery did well in his defensive responsibilities to clear any ensuing danger inside our box.

Jones’ first contribution saw him try to release the willing runner McKirdy, but Day did well to rush from his goal to clear ahead of the Crewe striker.

On 52 minutes, Newport produced a fine passing move down the Crewe left hand side and it resulted in a loud penalty claim after Willmott collided with Pickering. The home support thought that a spot kick should have been awarded by referee Handley, but it would have been a bit harsh as the two players came shoulder to shoulder.

Michael Flynn made a double change on 57 minutes, with the experienced Paul Hayes and Frank Nouble replacing Amond and Sheehan.

Crewe doubled their advantage on the hour mark with a well worked finish. Bowery slipped in Kirk with a clever through ball and the winger was really unlucky to see his cross shot beat Day but strike the post. It rebounded perfectly though for the in-form Bowery for him to tuck home his 11th goal of the season.

Moments later, Bowery was nearly through again but the assistant referee raised his flag to stop him in his tracks. The decision incensed the Crewe bench, who had felt that Bowery had timed his run to perfection. If he was on he had half of the pitch to run into.

At the other end, Crewe were standing up to Newport’s willingness to launch the ball into our box at any given opportunity. Crewe, and especially Ray were heading the balls out of our penalty area and Garratt eased the pressure by coming and collecting a few as well.

Nolan did brilliantly again to throw himself in front of a shot from Tozer. He applied enough on the shot to send it spinning over the bar for a corner.

Crewe were coping well with the pressure and looking a threat on the counter attack. One swift break saw Ainley and McKirdy combine to almost release full-back Perry Ng through on goal but he was forced into a foot race with the Newport goalkeeper and just missed out on getting there first. Ng had to receive treatment after Day’s clearance had smacked him square in the face.

With 13 minutes left, Crewe made a change with McKirdy being replaced by Dagnall. He used all his experience to win a number of free-kicks to allow us to regroup.

Newport gave themselves a lifeline with 9 minutes left. Inevitably it came via a set-piece corner. The ball was swung in from the right hand side and Mickey Demetriou acquired enough space to head past Garratt.

Ng was booked for dissent after protesting over the award of another corner that should never have been and as the ball came over, Ray, not for the first time was fouled after clearing it with his head.

To add some extra height for the closing stages, Raynes replaced Kirk for the final five minutes. Raynes was quickly involved in heading the ball clear and Crewe saw out six minutes of stoppage time to secure all three points for the second time this week.

Crewe Alexandra travel to Newport County looking for victory on the road in front of what could be a bumper crowd thanks to an Exiles ticket offer.

The ticket promotion has been extended to Crewe fans as well, meaning all age & prices categories are available for £5, except Under 6's who get in free.

Tickets are now available on the day at Rodney Parade ONLY

Crewe Alex fans intending to travel on the day WILL get a ticket, with 1,400 remaining in the allocation.