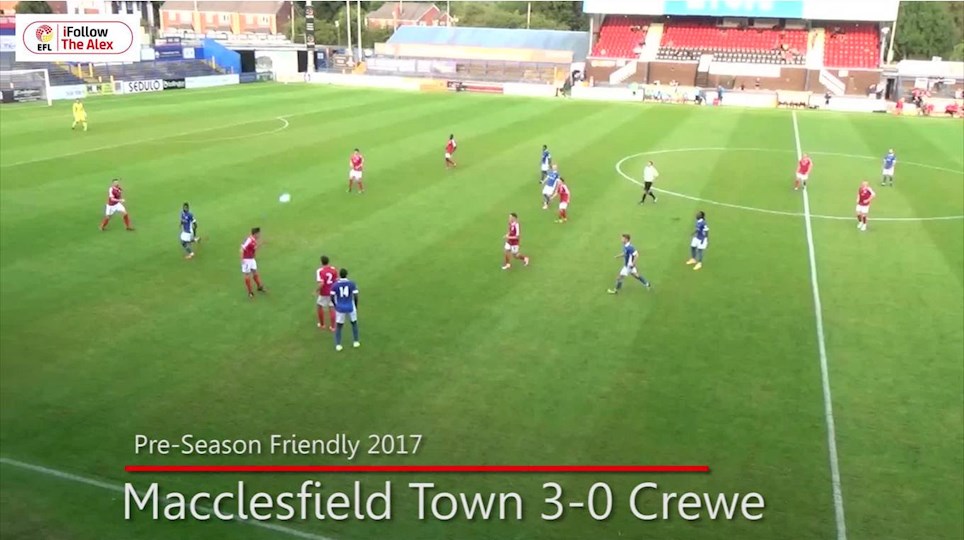 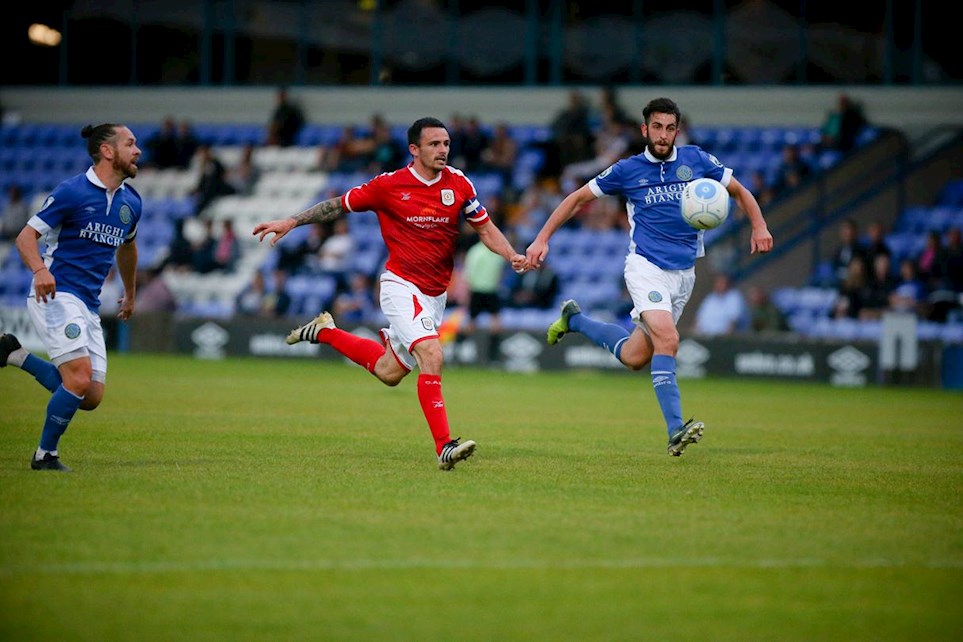 Crewe Alexandra’s latest pre-season friendly at Macclesfield Town’s Moss Rose ended in a 3-0 defeat. It was Crewe’s first defeat in pre-season and in truth there hadn’t been that much between the two sides until the referee penalised Perry Ng for an infringement just after the hour mark. It looked a soft one. A pre-season award if you like but Macclesfield grew in confidence after that.

The penalty was tucked home by Danny Whitaker and a headed from one of the Silkmen’s summer trialists proved the difference on the night. Ryan Lloyd completed the scoring in the final minute with a real poachers finish from Whitaker’s low cross.

Crewe did conjure up a few chances of their own but George Cooper fired wide in the first half and Michael Raynes went close with a far post header, but boss David Artell will be looking for an improvement when the serious stuff starts again on 5th August.

David Artell continued to tinker with his personnel for the short trip to Macclesfield Town. Chris Porter wasn’t risked again following his late withdrawal against Bury on Saturday. Brad Walker also sat this one out and Zoumana Bakayogo was recalled with Harry Pickering back on the substitutes’ bench following his outing at Gigg Lane. There was also a recall for Charlie Kirk in the front three.

An early searching ball from George Cooper saw Kirk break the offside trap and his cross into the Macclesfield Town penalty area was just too high for Chris Dagnall to connect and it was flicked behind for a corner. From the set play, Dagnall couldn’t quite direct his shot at the near post on target to trouble Shwan Jalal for the first time.

The first effort on the Crewe goal saw Scott Burgess drill an effort a yard wide under pressure from the Crewe centre-halves. His second effort was deflected into the gloves of Garratt after he got a good connection on it from the edge of the penalty area. Garratt also showed a safe pair of hands when full-back Mitch Hancox tried his luck from distance.

A positive burst from Kirk was halted at the death by a timely tackle. Both sides didn’t really register a genuine effort on goal in the opening 20 minutes.

Cooper very nearly took advantage of a headed back pass from George Pilkington but the Macclesfield defender had his goalkeeper to thank for spotting the danger and he collected it just ahead of the bright Crewe forward.

Similarly at the other end, a short back pass from Perry Ng, allowed Tyrone Marsh to race on to it but he was forced wide by the onrushing Garratt and his pass across goal was cut out by Ryan Wintle.

On 35 minutes, a quick break from Kirk allowed him to feed Cooper into the left hand channel of the penalty area but he rather snatched at this shot instead of shooting across the goalkeeper. It was our clearest opening thus far in the game. The two same players combined again moments later but it was Cooper turning provider on this occasion but Kirk couldn’t adjust enough to get his header on target.

As Crewe began to have some sustained pressure in the Macclesfield half of the pitch, Cooper had two decent efforts blocked.

Five minutes before the half time interval, Garratt produced a stunning tip over to deny Macclesfield’s trailist forward a goal. His shot had taken a wicked deflected and seemed destined to loop over the Crewe number one but he back pedalled at pace to get a strong touch on it and send it over.

At the break, Ollie Finney replaced Lowery, who had received a hefty knock in the first half and had needed treatment.

The Crewe goalkeeper was called upon early in the second half to deny the same player before a couple of great crosses from Cooper and Kirk only needed a decisive touch in front of Jalal.

Macclesfield soon introduced the former Crewe Alexandra goalkeeper Andy Dawber, who is on trial with the Silkmen.

Just after the hour mark, Garratt was to the rescue again. He made a flying save to his right to get a strong hand to Ryan Lloyd’s long range effort. It was another terrific save.

On 65 minutes, Ng was penalised inside the penalty area for a foul on one of Macclesfield’s trialists and the referee pointed to the spot. It looked a bit harsh because it did look as though the trailist had lost his balance on his own accord prior to Ng’s challenge. Danny Whittaker made no mistake from the spot.

Crewe tried to instantly hit back by Raynes couldn’t quite keep his header down from Kirk’s excellent far post cross.

With 14 minutes remaining, a long searching pass from Elliott Durcell was met in the air by another of Macclesfield’s trialist and as Garratt came to meet him, the decisive touch took it past the Crewe goalkeeper for 2-0.

Crewe continued to press looking for a way back into the game, but Dagnall was at a stretch to head a cross from Ainley towards goal.

In truth, Macclesfield could have added to their tally but for Zoumana Bakayogo getting one off the line before Lloyd did find the net for a third time with a tap in following a low cross from Whitaker.