Wycombe Wanderers come to Gresty Road riding high in League Two in fourth position in the league, with Crewe contrasting sitting fifth bottom of the table.

The Chairboys won 3-2 at Adams Park in September, but Crewe were actually winning the game until the 88th minute when the hosts stuck twice to snatch victory.

The Alex won the corresponding fixture here at Gresty Road last season, 2-1 thanks to goals from Chris Dagnall & a late James Jones penalty after Adebayo Akinfenwa had equalised.

Crewe are currently on a seven match streak of winning one, losing one. Defeat at Carlisle last weekend means that a win is on the cards this weekend if that run is to continue! 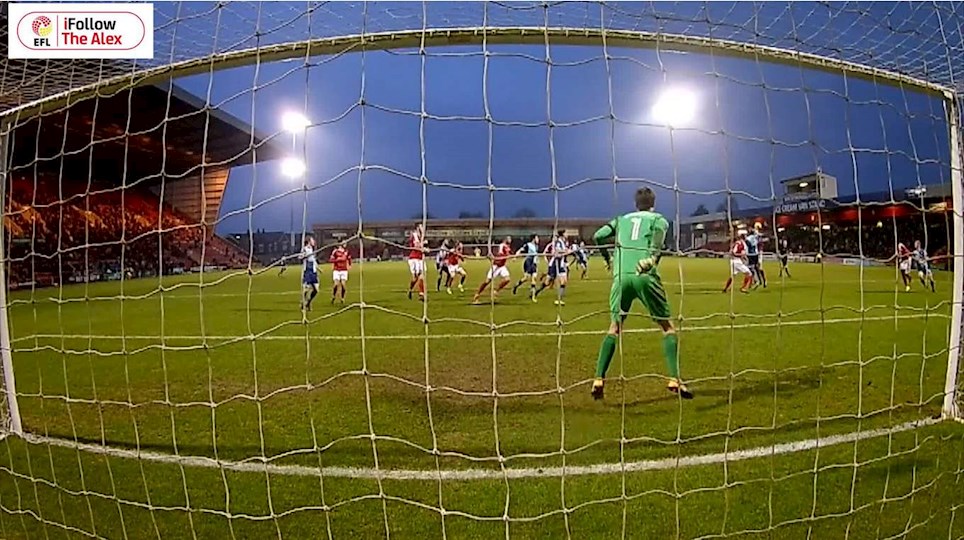 Gareth Ainsworth’s Wycombe Wanderers snatched another dramatic winner against Crewe Alexandra with substitute Craig Mackail-Smith racing on to a long ball in stoppage time to poke a  goal past Ben Garratt.

Crewe had looked to have rescued at least a point when debutant Harry McKirdy tucked home a rebound in the 88th minute after Scott Brown couldn’t collect a low drive from Ryan Wintle. It was no more than Crewe had deserved after a hard fought encounter at Gresty Road, but we were left pointless again as we suffered our 17th defeat of the season in front of a crowd of 3,645.

Crewe had led 1-0 at half-time through Chris Porter’s penalty spot but Wycombe had fought back to lead 2-1 through the lively Paris Cowan-Hall and in controversial circumstances through substitute Nathan Tyson from a soft free-kick after Adebayo Akinfenwa had handled in the initial build-up. Akinfenwa’s arm was well above his head and the whole stadium pointed to the obvious infringement, but referee Coy nor his assistants spotted it and Tyson eventually bundled it in at the far post.

Following McKirdy’s tidy finish to make it 2-2, a long punt deep into stoppage time saw Raynes slice a clearance into the air and Mackail-Smith gleefully tucked home a sickening winner. It was a soft goal to concede.

Veteran forward Chris Porter returned to the Crewe Alexandra starting line-up after shaking off the ankle injury that ruled him out of last weekend’s 1-0 defeat to Carlisle United. After getting one back from injury, it was therefore ironic that Chris Dagnall was ruled out with a knee injury. Centre-half, Michael Raynes replaced Dagnall as captain.

Ryan Wintle returned to the starting line-up for the first time since September after overcoming his fractured tibia, to take the place of Tom Lowery.

With George Cooper completing his move to League One Peterborough United on Thursday, his departure presented an opportunity to Charlie Kirk for only his third start of the season in League Two.

The club’s new loan signings, Harry McKirdy and Daniel Barlaser started on the substitutes’ bench after only completing their moves ahead of yesterday’s midday deadline.

Ahead of the game there was a moment of reflection for the passing of Cyrille Regis. The former West Bromwich Albion and England striker passed away this week at the age of 59.

Crewe made the ideal start to the game when youngster Kirk caught defender Nathan McGinley napping in possession inside the penalty area. In the fifth minute, some really bright play from Kirk saw him nick the ball from the defender and McGinley caught him. The Wycombe defender hadn’t seen him and the referee had no hesitation in pointing to the spot. Leading scorer, Porter stepped up to place his 12th goal of the season past Scott Brown. The Wycombe goalkeeper got something on it but couldn’t keep it out.

Wycombe tried to hit back almost immediately and the lively Paris Cowan-Hall was unfortunate to see his powerful shot just swerve wide of Ben Garratt’s left hand post. Dominic Gape also shot over from the edge of the penalty area, as the visitors aimed to hit back.

Wycombe’s intended crosses were not hitting Adebayo Akinfenwa with any regularity and Raynes continued to dominate much in the air.

Callum Ainley was a real threat for the Railwaymen and he was causing Joe Jacobson all sorts of problems with his directness. One forceful run from Ainley saw him go at the Wycombe back line but off balance he shot well wide of the mark.

The Chairboys' best chance of the first half saw Marcus Bean and Cowan-Hall get in behind down the left and a low cross reached Luke O’Nien but he could only side foot his close range effort well over Garratt’s crossbar.

On the half an hour mark, Crewe Alexandra produced some concerted effort inside the Wycombe box. A mass scramble saw Wintle draw a good save from Brown and from the second phase both Porter and then Nolan with his head went close to making it 2-0.

The visitors’ continued to shade the possession and Cowan-Hall twisted and turned before firing against Walker and it flashed behind for a corner. Akinfenwa also caught one on his chest but shot well wide on the turn.

Crewe lost goalscorer Porter before the half-time interval and he was replaced by Jordan Bowery. Bowery’s first contribution saw him and Bean try to reach an Ainley corner, but it deflected into the side netting.

Youngster Reilly was a little unlucky to get through on goal after he was penalised for a slight nudge on McGinley. It was a little harsh as it looked as though the forward had used his frame well to turn on to a pass from Ainley.

In stoppage time, Garratt left his line superbly well to punch a deep free-kick from Jacobson clear and there was still enough time for Cowan-Hall to flick a header just wide, but there looked to have been a push on Raynes in the initial build up.

Wycombe Wanderers came out in the second half and tried to build some instant momentum to get on level terms. Nolan was booked for poking the ball out with his hand as Wycombe tried to take a quick throw-in.

Good combination play involving Reilly and Ainley saw Kirk have a shot blocked before Wycombe’s pressure told from a free-kick. A cross from Jacobson was headed back across the goal mouth and Cowan-Hall half volleyed home from close range.

With 25 minutes remaining, Ainsworth introduced his double substitutes’ Mackail-Smith and Nathan Tyson for Cowan-Hall and Matty Bloomfield. They would have the desired impact.

Crewe’s best chance to retake the lead fell to Kirk at the far post but he struck over the crossbar with Brown to beat. He should have done better but perhaps he thought the defender infront of him was going to head it.

Crewe also introduced new loan signings, McKirdy and midfielder Daniel Barlaser. Kirk was named man-of-the-match before departing the pitch. McKridy was lively and there was a shout for a penalty after he went down just inside the box.

It looked as Wycombe were going to nick the three points when Tyson bundled in a cross at the far post with six minutes left on the clock, but Crewe were understandably annoyed that the referee had not spotted Akinfenwa’s obvious handball. Manager David Artell was ordered to the stands following his protest.

Crewe responded brilliantly and after Wintle’s low drive wasn’t held by Brown, there was McKirdy to tuck home a debut goal from close range. There was two minutes remaining and Crewe looked the more likely side to win it with Bakayogo having a late shot saved. Eddie Nolan also had a great header that appeared to have crossed the line disallowed.

It was heart breaking though for the Alex as Raynes' hurried clearance from a long ball presented Wycombe with a late opportunity and the experienced Mackail-Smith took full advantage to make it 3-2.

Come and get behind the boys against promotion challenging Wycombe Wanderers. Kick off this Saturday is 3pm.