Unable to make it to our FA Cup replay against Blackburn? The Alex have you covered…

Crewe & Blackburn do it all over again under the floodlights at Gresty Road after playing out a gripping 3-3 draw in the original tie at Ewood Park.

Rovers took a commanding 3-0 lead inside 20 minutes, but after having two men sent off, Crewe battled back to earn the credible draw to set-up the replay.

The winner of the contest will take on Hull City at home in the third round in January, but Blackburn haven't gone out any earlier than the third round in 45 years - the last side to beat them this early in the competition? Crewe Alexandra of course!

The best way to take in the game is obviously in person at the stadium (tickets available at up until kick-off, click here for more info) but if you can't make it, then take in the information below for different ways to follow the action!

Overseas-based fans will not be able to watch the game live as FA Cup games are not part of the streamable package, but audio commentary WILL be available.

You can subscribe to iFollow The Alex HERE for a monthly fee of £4.49. 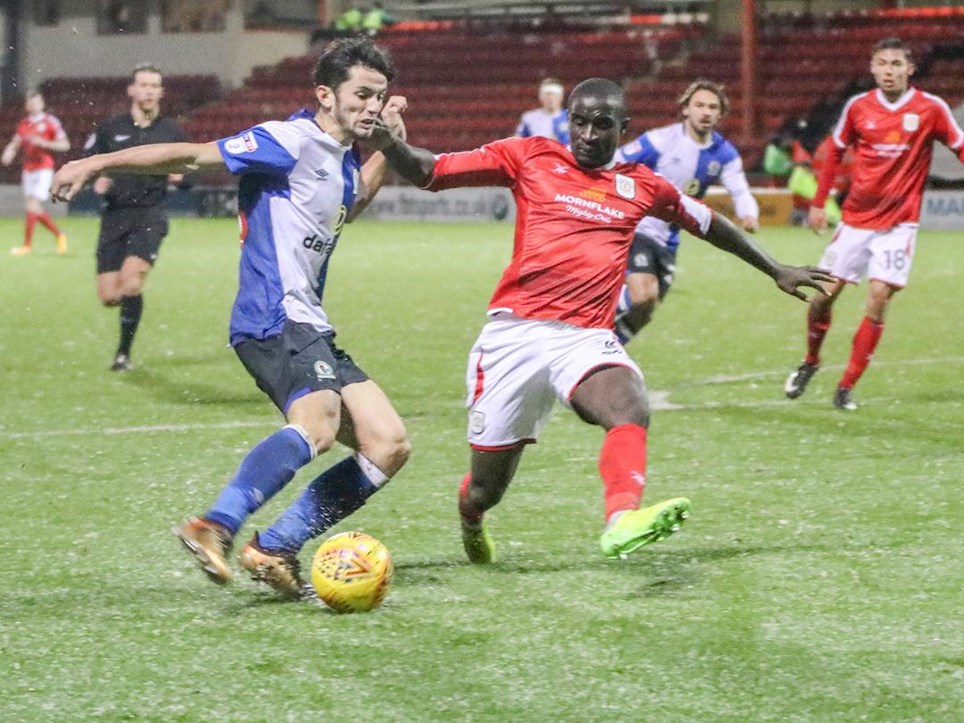 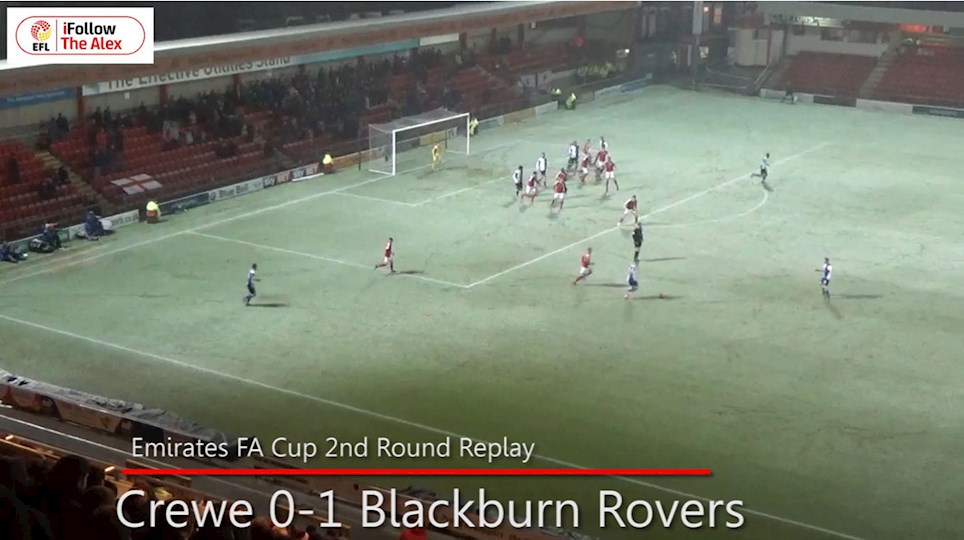 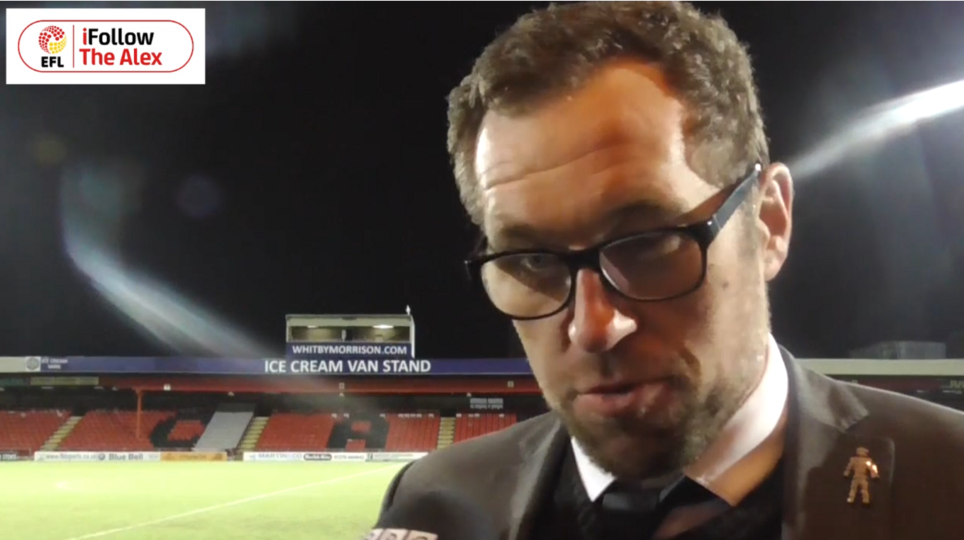 Crewe exited the FA Cup at the second round stage, as the experienced centre-forward Danny Graham clinically finished the only goal of the game after Crewe surrendered possession in the 24th minute. It was no more than Rovers deserved with Graham also hitting the crossbar with a wonderful effort from 30 yards and the likes of Joe Nuttall and Craig Conway also going close to killing the tie off.

Rovers deserve to face Hull City in round three after bossing much of this replay, but Crewe had two great chances to equalise with Chris Dagnall heading against a post following a dangerous cross from sub Charlie Kirk and with minutes to spare, Jordan Bowery, curled one inches wide as we tried to force extra-time.

David Artell made two changes from the side that lost narrowly at Cheltenham Town at the weekend. Brad Walker and Jordan Bowery were left out for the visit of Blackburn Rovers as Zoumana Bakayogo and Callum Ainley returned to the starting line-up.

The original fixture was put back by 24 hours due to adverse weather conditions and still kicked off in a bit of a snow storm. Although the pitch was becoming more taxing by the minute, Crewe Alexandra evidently got the ball down and tried to play their football.

David Artell’s side made a promising start to the Cup tie, forcing an early corner and then George Cooper’s delivery was too long for Chris Porter who had pulled off at the far post.

Although Crewe had made a bright start, it was Blackburn Rovers who carved out the best chance of the early exchanges. The fit-again Craig Conway produced a tempting cross but Joe Nuttall failed to hit the target.

The visitors began to control the game and after the impressive Charlie Mulgrew flicked a header wide they duly took the lead on 24 minutes. Crewe only had themselves to blame after surrendering possession far too easily. After receiving possession from Raynes, George Cooper tried to flick it around the corner and lost the ball to Derrick Williams. When the ball was played into Danny Graham, the experienced striker was absolutely clinical with his finish past a helpless Garratt.

Nuttall then slipped past Nolan but the Irishman did well to recover and poke it behind for a corner. On 32 minutes, Graham nearly doubled the lead with a superb effort from almost 30 yards. He went for an outrageous effort from close to the by-line that had Garratt beaten but it struck the crossbar and Crewe survived.

Crewe then lost Ainley due to a nasty cut above his eye and had to be replaced by Charlie Kirk. With the Alex down to 10 men for a short spell of time as Kirk was made to wait to come on, Blackburn nearly doubled their lead as Conway hit an effort over the bar.

The Railwaymen got into the interval and had chance to regroup but Blackburn started the second half eager to grab an early second goal and kill the tie off.

Mulgrew’s early cross to the far post was cleared by Raynes, who continued to clear the ball with his head.

A good ball from Cooper released Porter and he in turn tried to find Dagnall but Mulgrew read the situation well to clear the ensuing danger.

Bakayogo got away with one after he slipped at the far post and Garratt did well to notice the loose ball and pounce on it before Nuttall accepted another gift.

Crewe were penned in and finding it difficult to get the ball up the pitch. The visitors freshened things up by introducing the fresh legs of Sam Hart and Bradley Dack. Hart nearly made it 2-0 but his goalline effort was cleared by Eddie Nolan.

Kirk added some zest to the Crewe attack and on 61 minutes, he provided a fantastic cross that Dagnall threw himself at and he was unlucky to see his diving header rebound off the post. It was the closet Crewe came to an equaliser.

Dagnall made way for Bowery and Reilly replaced Porter as Artell went for a fresher approach up front.

Dack fired just wide of the target before at the other end, Nolan couldn’t quite get his cross back across a crowded six yard box.

Blackburn nearly killed the game off on 76 minutes, when Nolan sliced a clearance and Garratt was forced to make a smart save to deny Nuttall from close range.

Elliott Ward was booked for a foul on Kirk before the Crewe winger combined with Bowery in the dying minutes. The Crewe striker took a touch before curling his effort just wide of the mark. It was a fantastic effort that probably deserved more.

There was still time for Ng to latch on to a deep cross from Bakayogo and his deflected shot spun through to the gloves of Leuwiler. Crewe huffed and puffed but couldn't force home an equaliser that would have forced 30 extra minutes.

The sides have been forced to play again after a 3-3 draw at Ewood Park on Sunday, with the winner being rewarded with a Third Round tie at home to Hull City in January.

Call the ticket office on 01270 252610 on Monday-Friday between 9am-5pm or drop in-store to purchase your tickets & beat the queues ahead of match day.

*This fixture has been rescheduled from Tuesday 12 December