Boss hopeful ahead of Second Round trip to Ewood Park 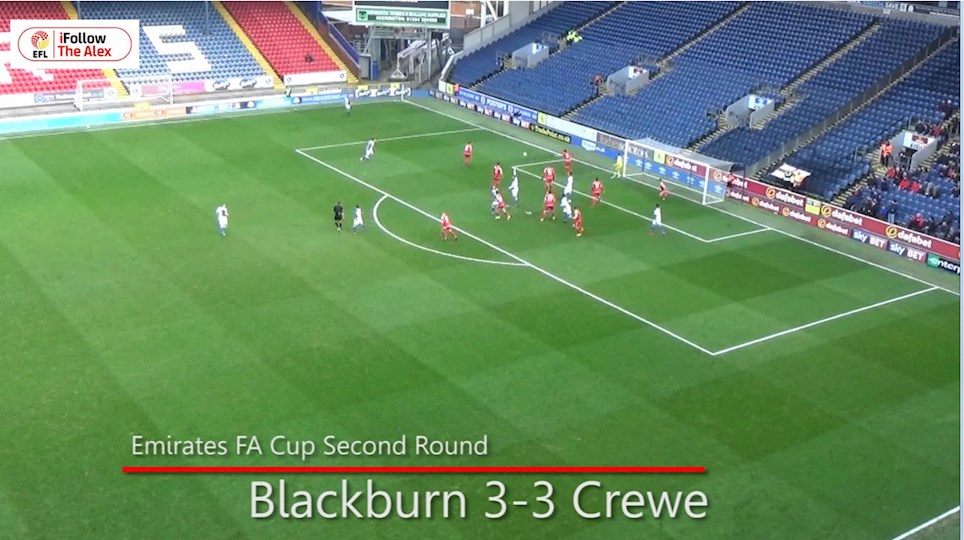 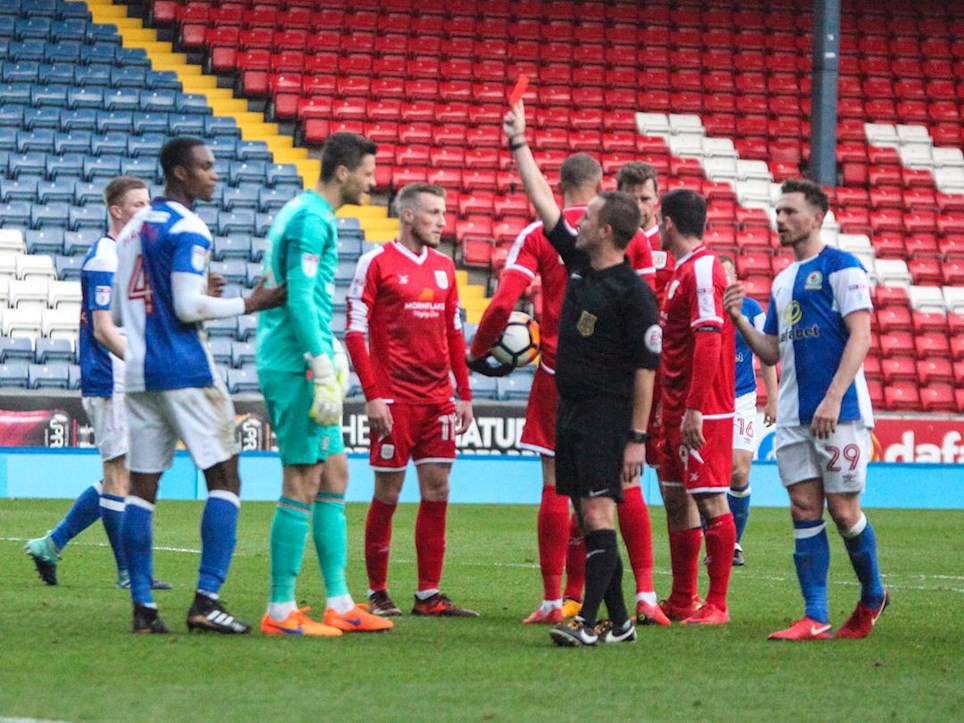 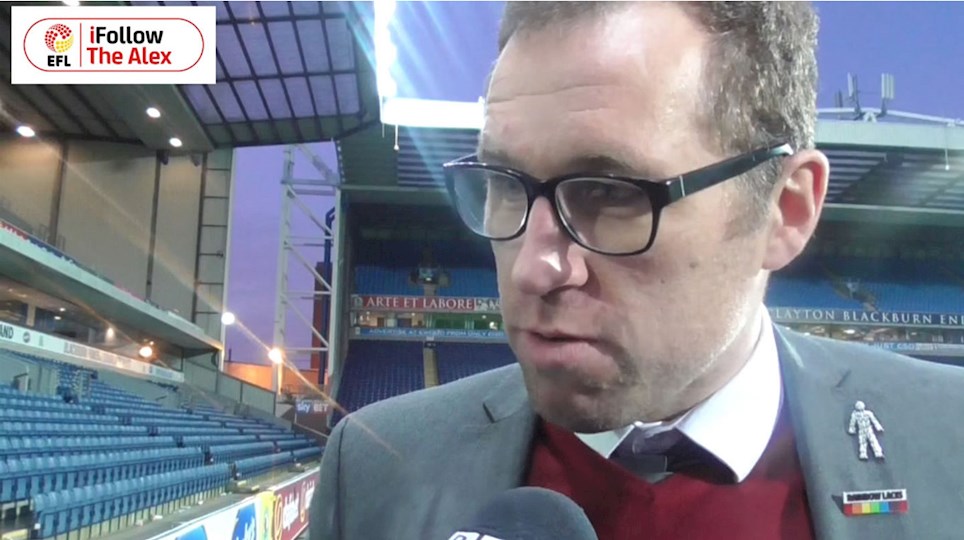 A spirited Crewe Alexandra fought back from 3-0 down to force a replay against League One side Blackburn Rovers in the second round of the Emirates FA Cup. It really did seem game over after 20 minutes after two goals from Dominic Samuel and another from Danny Graham had put Tony Mowbray’s side firmly in the driving seat.

This amazing FA Cup tie turned on its head just after the half an hour mark when Rekeem Harper was sent-off for a professional foul on Chris Porter. Porter kept his nerve to convert the spot-kick and when Elliott Bennett was sent-off for kicking out at Perry Ng just minutes into the second half, it really was game on.

Crewe made their two men advantage count and quickly drew level from two well worked corners that substitute Eddie Nolan and Chris Porter converted to set up a grandstand finish.

Crewe had opportunities to win it too with Jordan Bowery, George Cooper and Chris Dagnall all going close to sealing the tie at the first attempt. Harry Pickering also hit the crossbar with a lofted shot and Porter had a great chance with a header to seal a hat-trick but he couldn’t direct it on target.

Crewe had to settle for a replay and although Crewe will be delighted to be in the hat, they were be a little disappointed that they didn’t find that winner.

Mowbray will be annoyed that his Blackburn side imploded with those two red cards after seemingly being in absolute cruise control.

David Artell made two changes from the side that narrowly lost 2-1 to Luton Town last week. Jordan Bowery, who came on at half-time against The Hatters started at Ewood Park, as did Tom Lowery. The young midfielder returned from a hamstring injury to start centrally with Callum Ainley. Perry Ng and Harry Pickering reverted back to the full-back positions.

Midfielder Conor Grant and the former Rovers defender, Eddie Nolan, were the unlucky ones to drop to the substitutes’ bench.

The home side forced two early corners. Walker stood firm to head away the first one, but one from the training ground, saw Corry Evans unleash a superb volley from outside the box that Ng blocked.

Crewe’s first real venture into the Blackburn Rovers half of the pitch saw Ainley shoot directly into the gloves of Jayson Leuwiler.

In the 7th minute of a fairly open period, Bennett produced the pass of the game to find Danny Graham. His splendid cross field pass split the Crewe reargued but on the volley, Graham couldn’t control his volley and it sailed harmlessly over Dave Richards’ crossbar.

Moments later, Graham spun inside the penalty area but his shot was blocked. At the other end, Leutwiler did well to gather a bouncing ball as Bowery threatened to pounce on any mistake.

Blackburn’s positive start to the game resulted in the opening goal after 11 minutes. The powerful Dominic Samuel ran down the side of Walker and after showing great strength, he drove his shot through the legs of Richards.

The opening goal prompted a change of tactics from Artell. Ainley came out to the left to allow Bowery to push further forward. Dagnall operated through the middle of the pitch, as we switched more to a 4-4-2.

Crewe hardly had time to settle into it before Blackburn scored a second goal on 15 minutes. Samuel turned provider with a splendid through ball and Graham drove his shot into the far corner. It was now a massive uphill struggle against a League One side and Crewe were not at the races.

It was 3-0 on 20 minutes as the impressive Samuel brushed Walker aside to race through on the Crewe goal and the young striker kept his cool superbly well to slot it past a helpless Richards. It was turning out to a long afternoon in Lancashire and Crewe had to show some real character to prevent an avalanche.

Crewe launched a promising attack with Dagnall feeding Cooper down the left hand side and his deep cross aimed at Porter but it was well covered by Paul Caddis. Walker was the first to be booked for a challenge on Rekeem Harper.

A Cooper free-kick was flicked behind by Dagnall before Crewe were gifted a penalty after Porter was upended by Harper as he was poised to shoot on 33 minutes. Harper was shown a red card for a professional foul and Porter picked himself up to bury the spot-kick with ten minutes of the first half remaining.

Despite going down to ten men, Blackburn tried to respond with Marcus Antonsson driving a shot just wide of the target.

A forceful run from full-back Perry Ng then saw him cut inside and shoot low at Leutwiler. Moments later, a fantastic pass from Lowery nearly released Porter but Elliott Ward did well in his recovery and managed to clear.

Although Crewe were certainly enjoying their best spell of the afternoon, Blackburn were a threat on the counter-attack and Walker did well to block a shot from Evans, as the home side threatened to find a fourth goal before the half-time interval.

They also had a strong shout for a penalty of their own when a cross from Caddis struck Dagnall’s hand but the Alex captain couldn’t get out of the way and it would have been harsh.

In the last minute of the first-half, Walker was fortunate to escape a second yellow card after going through the back of Samuel. With the Blackburn players around the official and trying to even the numbers up, Walker was spoken to but was let off after receiving a final ticking off from referee David Webb.

There was still time for Dagnall to drive towards goal and unleash a low drive from 25 yards that Leutwiler did well to hold.

At the break, Eddie Nolan replaced Brad Walker, who had been operating a tightrope following his yellow card.

Crewe tried to get on the front foot early. Cooper produced a really strong run into the Blackburn box and the ball fell invitingly into the path of the supportive Pickering and his lofted shot rose up to strike the Blackburn crossbar.

Eight minutes into the second half, Blackburn were reduced to nine men after their captain Bennett was adjudged to have kicked out at Perry Ng off the ball. The referee’s assistant spotted the incident and referee Webb appeared on the scene to brandish the second red card of the afternoon. Crewe had an enormous advantage and could really sense an unlikely comeback.

More good pressure from the Alex saw Ainley line one up for Cooper and his low drive took a slight knick that took it behind for a corner. Cooper took it from the right hand side and the former Blackburn defender, Nolan nodded in at the far post to make it 3-2.

Moments later, Dagnall shot into the side netting via a deflection and from another corner, Cooper’s delivery was headed home by Porter for a dramatic equaliser. There was still half an hour on the clock and Blackburn with nine men were really struggling to contain a rampant Alex.

Dagnall was just denied as he was about to pull the trigger and Lowery whistled a shot inches wide of the right hand post. A low cross from Cooper nearly found Bowery but just had too much on it to take it through to the much busier Blackburn goalkeeper.

Crewe had a golden chance to go ahead on 65 minutes after Bowery had a powerful volley blocked when it looked certain to hit the back of the net. Bowery seemed annoyed as Ainley appeared to have got in his way slightly.

At the other end, a burst from Smallwood saw him produce a tempting low cross across the six yard box but Stubbs was well placed to clear for a corner.

The Alex kept probing and after more patient passing, Dagnall unleashed a forceful drive that Leutwiler did well to get behind it and fist it away from danger. It was a fantastic effort that if it had gone either side of him could well have put Crewe ahead for the first time.

Samuel was rather fortunate not to be a third Blackburn player to be shown a red card when he appeared to kick out at Ng close to the touchline. The referee went over and had a word but gave him the benefit of the doubt. He had missed it.

With ten minutes remaining, Crewe produced another great move with Cooper finding Pickering and the full-back’s cross picked out Porter superbly but he couldn’t direct his header goalwards. A player of his calibre in the air would have been disappointed not to have at least forced a save from the goalkeeper and he had Bowery coming in behind him. It was our best chance to have completed a fantastic comeback.

On 85 minutes, Crewe made a change with Reilly replacing Ainley but that genuine chance never fell to the young Crewe striker or anyone else. So, we will have to do it all again at the Alexandra Stadium.

*Under 12's must be accompanied by an adult

Coaches depart at 10:45am and are priced at

Leave the M6 at Junction 30 and join the M61, at the first exit join the M65 and head East to Blackburn.

Leave the M6 at Junction 29 and join the M65 and head East to Blackburn.

Travelling from Yorkshire, either on the B6234, the A56 Haslingden by-pass or the Skipton Road, join the M65 and head West. Leave the M65 at junction 4 and head towards Blackburn on the A666, Ewood Park is about a mile from the motorway on the right hand side.

The frequency of buses serving Ewood Park is every 10 minutes. For timetables see www.lancashirebus.co.uk

If people require any further information they should use the Traveline website or telephone number: www.traveline.org.uk 0871 200 22 33

Matchday parking is also available, either in advance or via cash on the day, on Car Park H, Car Park F and Car Park B priced at just £10 – subject to availability.

If you have pre-booked a car parking space please look for car park signs near the ground. Car Park F is approximately 100 yards from the ground. A permit is not required but surfaces are not considered suitable for wheelchairs users or those with mobility issues.

If you are given a lift to the ground by car, taxi or minibus you can use one of the two drop-off points at the ground – either end of the Jack Walker Stand. Both are within 50 yards of access into the stadium and on the level. They also serve as pick-up points after the match.. 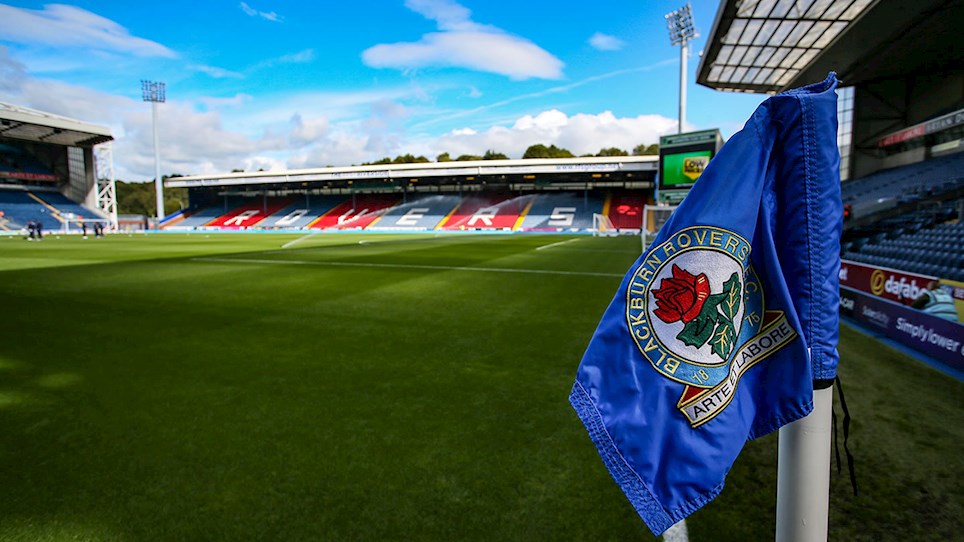