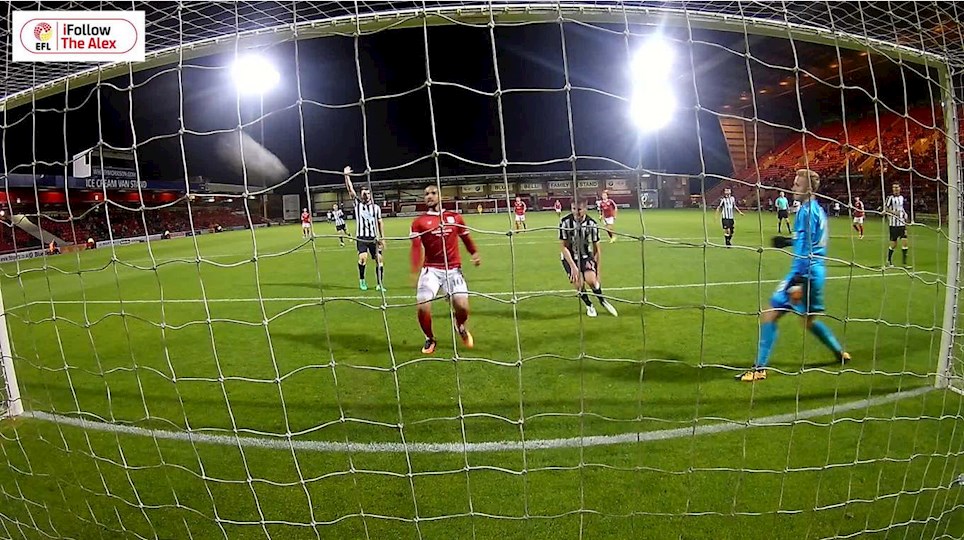 
What the press made of the Checkatrade Trophy Defeat

A goal in each half from our former loanee midfielder Liam Smith and Luke Charman sealed Peter Beardsley’s Newcastle youngsters a deserved 2-1 win at the Alexandra Stadium this evening. The Alex rallied late on and a goal from Jordan Bowery with just three minutes remaining set-up a grandstand finish, but we couldn’t find an equaliser that would have taken the tie to a penalty shoot-out.

Maybe we should have been looking at a potential penalty shoot-out because there was a loud and genuine shot for a spot-kick in injury-time after Bowery had a shot blocked by a hand.

With Chris Dagnall rested and on the substitutes’ bench, goalkeeper Ben Garratt was named captain on the night. With David Artell electing to rest a number of his first-team regulars there was game time for Jordan Bowery, Harry Pickering and Charlie Kirk. Young defender Billy Sass-Davies was also handed his senior debut after appearing on the bench for the opening five games of the season.

Ryan Wintle and Dagnall started on the bench and the inclusion of Sass-Davies allowed Brad Walker to move into midfield.

Crewe were shocked in the 4th minute with our former loanee midfielder Liam Smith looping a fine shot over Garratt for the opening goal. The Newcastle youngsters were decisive and penetrative with their passing to create the opportunity down the Crewe right hand side and it was a good finish from Smith, who had his loan spell with us last season ended prematurely through injury.

The Railwaymen tried to respond quickly and a cross from Pickering nearly picked out Bowery before Cooper nearly broke on to a through ball from Kirk.

Crewe began to get Cooper more on the ball and the influential attacker whistled a shot just wide from almost 30 yards out. Moments later he produced a wicked cross that only needed a decisive touch as it entered the Newcastle penalty area at pace.

Cooper was then gifted our best chance of the first period. A clearance hit the heal of a defender and it broke invitingly to Cooper but he curled his shot straight at the Newcastle goalkeeper Nathan Harker.

Peter Beardsley’s youngsters were neat and tidy in possession and were certainly a threat in the final third of the pitch with Smith supportive of Luke Charman and the skilful Victor Fernandez. Charman should have doubled the visitors lead before the break but his firm header just went the wrong side of the left hand post. The quick Newcastle forward then outpaced Sass-Davies down the outside but screwed his shot inches wide of the far post.

Dan Barlaser and Callum Roberts also shot over as the Magpies looked to extend their lead before the break.

Crewe’s best chance of opening up the Newcastle defence was Cooper. He hit a splendid cross that Bowery couldn’t quite reach at full stretch. Kirk was also a little unfortunate not to shut down an awkward back pass for Harker to deal with. The Newcastle goalkeeper managed to lift it over the onrushing Crewe forward.

As a fairly open first half drew to a close, Kirk had a potential first goal for the first team ruled out for a tight offside and Charman likewise at the other end. Both decisions appeared tight.

A cross from Tom Lowery was nearly headed by the advanced Walker as he nearly stole a yard on his marker Hunter, but the Newcastle defender did well to get the final touch. In the final minute of the half, Zoumana Bakayago broke down the left hand side and Bowery prodded his cross over.

The visitors made a change at the break with the lively Fernandez replaced by Callum Smith.

Crewe had their agile goalkeeper Ben Garratt for keeping us alive in the tie. The stopper produced two fantastic saves to deny Kyle Cameron and Charman.

Bowery had an early shot blocked on the turn with Cooper lurking before Pickering provided a fantastic ball across the box after he linked up superbly with Bowery. The low cross was crying out for a touch.

Crewe huffed and puffed but couldn’t find that equaliser and Charman slid in a second goal on 68 minutes after he stole in front of Nolan and Garratt, on this occasion was helpless to stop it.

That prompted a double change from David Artell with Owen Dale making a lively senior debut and Wintle replaced Lowery and Kirk. Cooper was also given a rest late on for Lewis Reilly.

Dale had a real hunger for the occasion and he showed some great touches. Cooper provided another excellent delivery for Bowery  but again he couldn’t quite keep it down. His persistence paid off though with three minutes left. Dale again did superbly to link up with Ainley and his dangerous low cross was tucked home by Bowery for his first of the season.

Crewe did have a real go towards the end, and there was a late shout for a penalty when Bowery saw a shot blocked by a hand but the referee waved away our appeals. Nolan also headed a Cooper free-kick at the far post that drew a good save from Harker.

Newcastle had a late chance to seal it in stoppage time but Charman curled his effort wide of the post.


What the press made of the Checkatrade Trophy Defeat

The tie will take place at Alexandra Stadium on Tuesday 29 August, kick-off 7:30pm.

After Newcastle, Crewe will host Oldham & then travel to Port Vale before the top two in the group progress to the knock-out phase which starts in December.