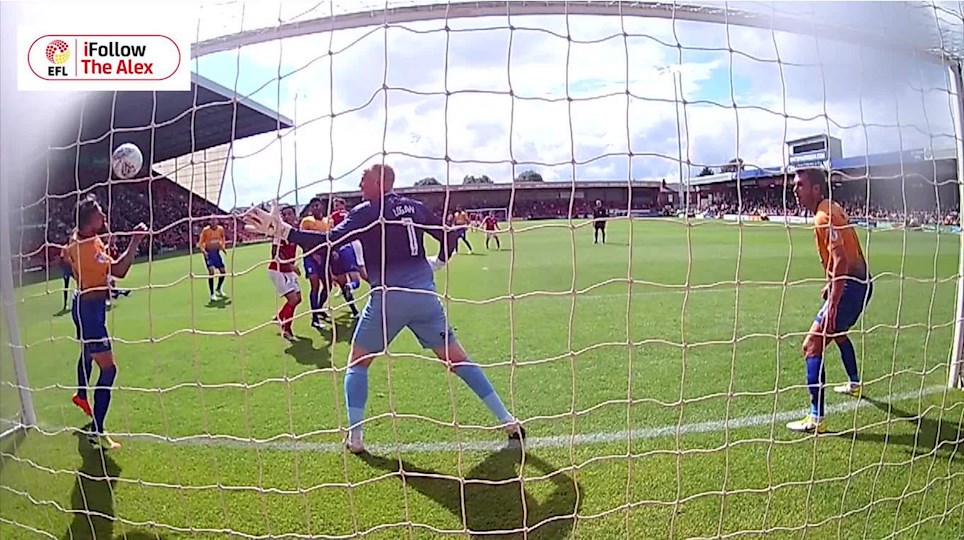 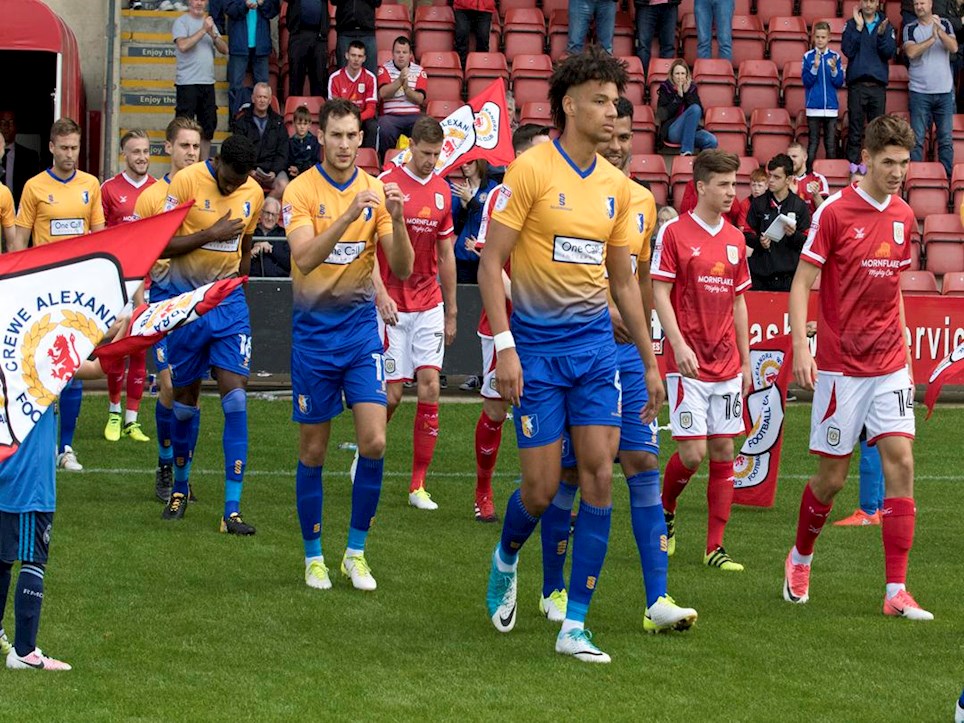 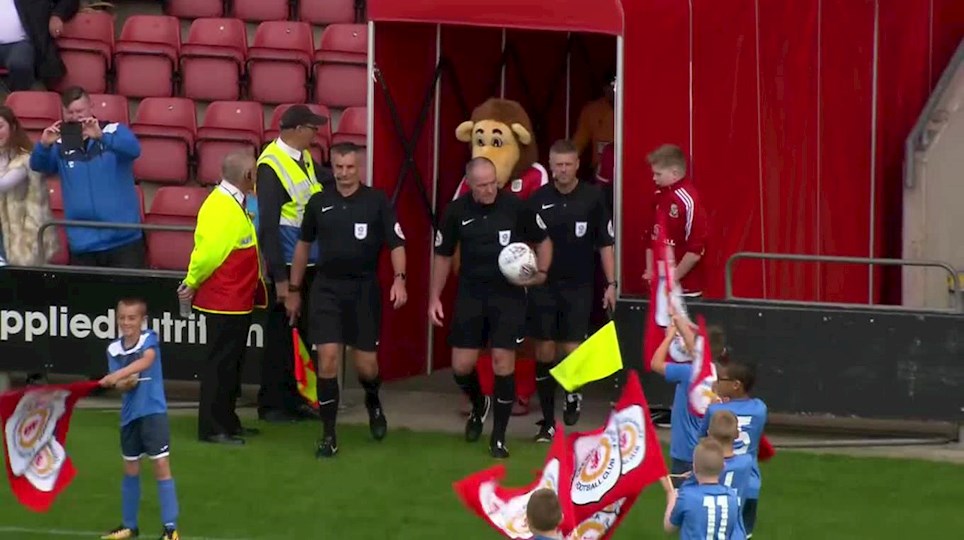 Crewe Alexandra and Mansfield Town shared a 2-2 draw on the opening day of the season.

It was a real thriller to kick off the 2017/18 season with remarkably four headed goals, two of which came from our summer signing Chris Porter. Porter had twice given the Alex the lead only for Danny Rose and David Mirfin to equalise for the Stags, who have been placed as the bookies favourites for promotion.

Both teams tried to go on to win the game with Chris Dagnall forcing a late save from Conrad Logan and then Crewe only needed to apply a telling touch at a corner after a mass scramble following a towering header from Michael Raynes, but a winner would have been harsh on either side.

With full-back Zoumana Bakayogo not fit enough to make the first game of the season due to a knee injury, David Artell named the same starting line-up that defeated a Stoke City XI 3-1 in our final friendly last Sunday. The Alex boss played a back three with George Cooper operating on the left hand side of a flexible 3-4-3 system.

Although he has been unable to appear in pre-season, striker Jordan Bowery was named on the substitutes’ bench for the visit of the promotion favourites. Youngster Billy Sass-Davies was also included in the match day squad for the first time in his career as defensive cover.

In an expectant atmosphere that always accompanies the first game of the season, the early tempo was excellent.

Mansfield created an early chance with Danny Rose heading wide at the far post after a telling cross from Mal Benning.

Crewe Alexandra’s first genuine chance of the afternoon duly arrived in the 7th minute with Chris Dagnall forcing Conrad Logan to push away his shot after some good work from Callum Ainley.

Moments later, good play from Lowery found Porter on the edge of the Mansfield Town box and he was just denied getting a shot off by a timely tackle from Zander Diamond.

A swift break away from Ainley then found Dagnall in space but his final shot was tame and straight at Logan.

Following a hefty tackle from David Mirfin on Ainley, the flow of the game was interrupted by a succession of fouls on both sides. Nolan was booked for a foul on Mellis and Mellis likewise for a late challenge on Lowery. Rose was also cautioned for an obvious trip on Walker as he advanced up the pitch. It got scrappy for a period with the referee trying to keep control of the proceedings.

Lee Angol curled one free-kick a yard wide of Garratt’s left hand post but in fairness, the Crewe goalkeeper had it covered. The new Mansfield number 9 also dragged a tame effort wide of the mark.

Some more good approach play from Lowery saw him and Ng play a neat interchange of passes on the Mansfield penalty area  and the Crewe right-back forced a good one-handed  save from Logan. Ainley, who was a threat going forward also pulled a cross just behind Porter and Dagnall.

With Mansfield not really forcing Garratt into a meaningful save, Crewe grabbed the opening goal in the final minute of the half. Cooper delivered a corner from the late and centre-half Raynes produced a tremendous first header and Porter outmuscled Mirfin to direct his header into the net for the first of his two goals on his debut.

Crewe had to deal with an early corner in the second period but there was an infringement and Crewe escaped the pressure.  It became obvious that Steve Evans had added some fire into his players at the interval and Rose duly equalised on 55 minutes with a tidy header into the far corner.

The equalising goal inspired Mansfield to go in search of a second goal themselves. The dangerous Rose poked one wide before Ng made a last ditch header to turn away at the far post.

Crewe rode the storm well and again took the lead of 63 minutes following a tremendous cross from Cooper. Dagnall did well to find him initially and Cooper’s accurate cross allowed Porter to provide another telling touch with his head. It was a wonderfully crafted goal.

Almost immediately a bouncing ball nearly saw Rose head over Garratt but the Crewe keeper judged it well to grab it. Mansfield hit back within four minutes though. Raynes was booked for grabbing Angol and from the free-kick taken from Joel Byrom travelled too far and Mirfin stole in at the far post to divert it into the roof of the net. It was a poor goal to concede so soon after getting ourselves ahead again.

Byrom was soon booked for fouling Walker before Angol made way for Omari Sterling-James. Crewe’s only change saw Bowery replace Ainley, who had been booked for a shirt pull before exiting.

The fouls continued to flow though and White was booked for a block on Cooper as he tried to make his way down the touchline.

Raynes cleared superbly again to deny Sterling-James before the Stags captain Zander Diamond tried his luck with a decent effort from 25 yards out.

Crewe had Garratt to thank for making a stunning save with his legs to deny Paul Anderson a third goal for the visitors and that spurred the Alex into some late surges of their own to try and claim all three points.

The best of those chances fell to Dagnall but his low shot was stopped by Conrad Logan. Moments later Cooper nearly got a decisive touch inside the six-yard box but the Stags managed to smuggle it away.

It was even closer in injury time when Raynes won a header at the far post but no-one in a Crewe shirt could apply a decisive touch to make it an opening day win for the Railwaymen. In the end a point apiece was fair.

Come and get behind Dave and the lads as they kick off the new season against promotion favourites Mansfield Town tomorrow.

It's sure to be a great opening game to the EFL season and we want you to make the Alexandra Stadium a fortress.