Goal Cam: Barnet: Porter Steers Home To Make It 4 In 4!


Free for all on iFollow Freeview 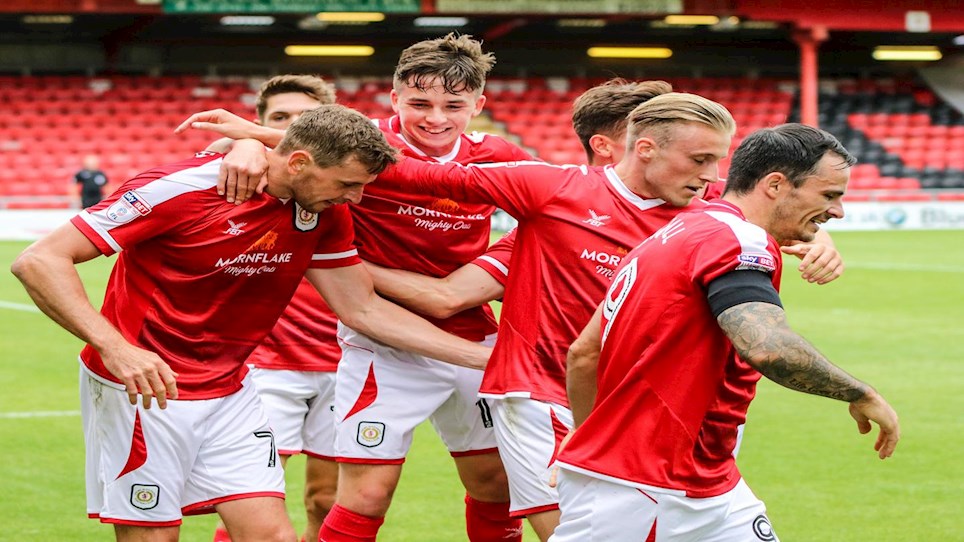 Crewe Alexandra recorded their first three points of the season thanks to Chris Porter’s fourth goal of the campaign. The veteran striker was in the right place at the right time to tuck home a superb cross from substitute Zoumana Bakayogo with just 15 minutes left.

Bakayogo had earlier replaced youngster Harry Pickering and his low cross missed out Michael Nelson and there was Porter to slide home the winner past Jamie Stephens.

It was a hard fought three points for the Railwaymen who just about shaded the chances overall although Barnet’s Mauro Vilhete’s dangerous looking free-kick in the second half looked to have clipped Ben Garratt’s crossbar.

Due to Perry Ng’s red card against Newport County last weekend, David Artell was forced into one change for the visit of Barnet.  The Crewe Alexandra boss used the opportunity to operate with three at the back and reinstate forward Jordan Bowery in his starting line-up. Bowery had previously been used as a substitute this season following a hernia operation in the summer.

Although Zoumana Bakayogo was passed fit to take his place in the matchday squad, youngster Harry Pickering retained his place after impressing last week.

Ahead of kick-off there was a one-minute silence to remember those who sadly lost their lives in Spain this week. The players wore black armbands as a mark of respect.

Crewe Alexandra made a bright start to the proceedings at Gresty Road, attempting to get on the front foot and force some early pressure on the Barnet centre-backs. With a pre-match downpour, the pitch was slick and suited the passing game of midfielders Tom Lowery and Ryan Wintle.

The Railwaymen were eager to get George Cooper into the game from his unfamiliar position on the right hand side and his first major involvement saw him deliver a dangerous looking cross into the Barnet box, but Chris Porter saw his header blocked for a corner.

From a simple throw-in infield, Cooper then forced Jamie Stephens into pushing his half-volley shot away for a corner. His next attempt was even more ambitious after he had spotted that Stephens had slightly crept from his line. Cooper tried his luck from within his own half but although it travelled like an arrow, it cleared the Barnet crossbar.

Barnet were a powerful and big side, who played some neat football of their own when they could. But it was Crewe looking the more likely side to take the lead. Captain Chris Dagnall fired over the crossbar after being found by Lowery before he turned provider for Bowery, but his header just lacked the power to draw a save from Stephens.

The visitors’ best chance fell to Jamal Campbell-Ryce after the referee played a good advantage following a foul by Lowery, but the midfielder’s shot was straight at Ben Garratt. Curtis Weston also had a powerful shot blocked by Michael Raynes. The Alex centre-half also had to deal with the physical presence of Jean Louis Akpa Akpro and was a worthy winner of the man-of-the-match award.

Crewe had a complaint over a penalty when Ricardo Santos appeared to handle a bouncing ball inside the penalty area, as the tenacious Dagnall tried to bundle his way through on goal. The referee, who was well placed in all fairness wasn’t interested in our shouts.

A forceful run from Brad Walker saw him produce a cheeky nut-meg to advance into the Barnet half of the pitch and his low drive was pushed away again by an impressive Stephens.

The flow of the game was interrupted by needless fouls and Barnet taking their time over goal kicks and throw-ins, and genuine chances seized before the half-time break. A late run and cross from Porter nearly found Bowery at the far post but it was just ahead of him.

Crewe started the second half on the front foot with Eddie Nolan firing over before Barnet lost Curtis Weston through injury. Jack Taylor replaced him. Barnet’s David Tutonda forced Garratt into an early save after a swift break from the visitors.

Pickering was cautioned for a trip close to the box and from the resultant free-kick, Vilhete’s excellent delivery forced Garratt backwards and he just got enough on it to push it out. Vilhete’s corner also needed a touch at the far post as it flashed across the six-yard box.

Crewe needed a spark again and the double substitution of Bakayogo and Ainley for Pickering and Bowery did just that. Bakayogo certainly offered some real zest from the left wing back position.

An early cross from the Frenchman, found Porter at the far post and his clever knock down fell to Dagnall and his controlled shot was tipped over by Stephens. The busier Barnet goalkeeper also did well to rush out and halt Porter.

Crewe continued to press and finally opened the scoring on 75 minutes. Bakayogo took full advantage of a slip from Taylor to get in behind a stubborn Barnet back line and his low cross was accurate enough to miss out Nelson and there was Porter to keep his cool in front of goal once again.

Now the Alex had to dig in and hold on to the result. A frustrated Taylor was booked for a reckless challenge on Wintle and Tutonda soon followed him into the referee’s book.

More good play from Porter, Dagnall and Cooper saw a late effort turned behind for a corner and our game management in the closing stages was excellent with Porter and Cooper continuously retaining possession in the corner.

Crewe were not troubled again and deservedly held out for all three points.

Goal Cam: Barnet: Porter Steers Home To Make It 4 In 4!


Free for all on iFollow Freeview

Tickets are on sale now for this weekend's Sky Bet League Two clash with Barnet at Gresty Road.

The game is part three of three of Dave Artell's side's triple home bill to start 2017/18, with the team still unbeaten after successive score-draws with Mansfield & Newport.

The Bees last visited Crewe on the final day of last season back in May, Crewe romping to a 4-1 victory that day thanks to a Chris Dagnall hat-trick.

Can Artell's boys produce a similar performance on Saturday?

Call the ticket office on 01270 252610 between 9am-5pm Mon-Fri to book your tickets, or pop in-store between those same timeframes.

Queues have been busy in the hours leading up to kick-off on match day, so it is advisable to book in advance if you can.

Click here to view all of the home ticket news