Crewe Alex take local rivals Port Vale on Easter Monday looking to do the double over the Valiants for the second time in four season.

The Alex won 1-0 at Vale Park in August thanks to a Chris Dagnall goal & Crewe can move futher clearer of the Valiants in the league table with victory.

Crewe are on good form as of late, with Vale stuttering in 2018, finding victories hard to come by. 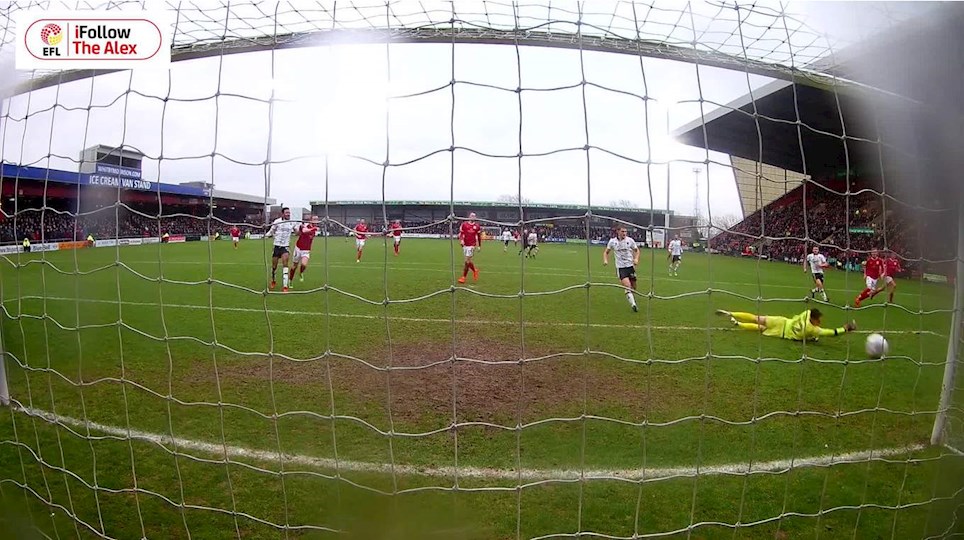 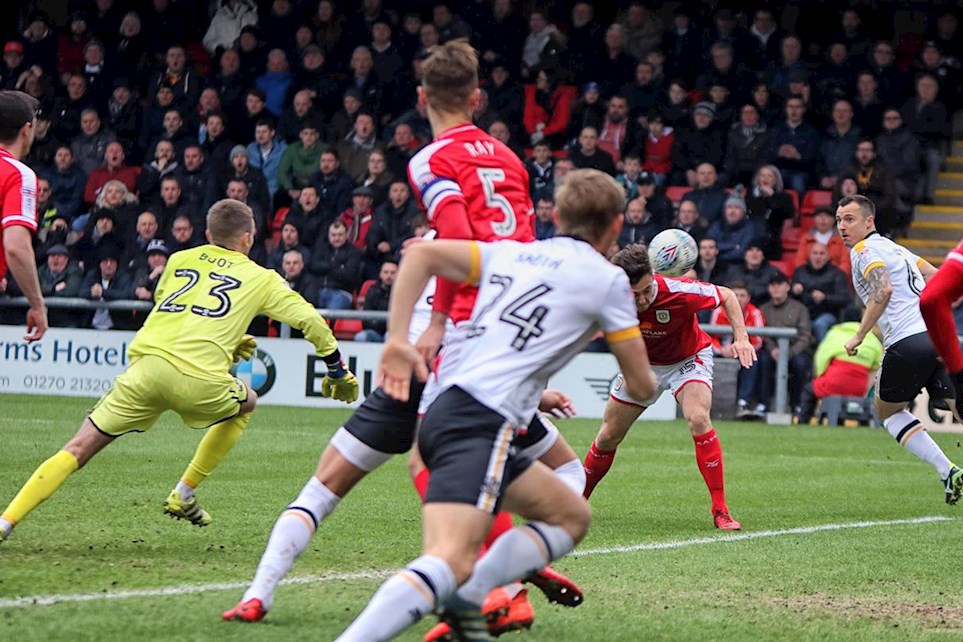 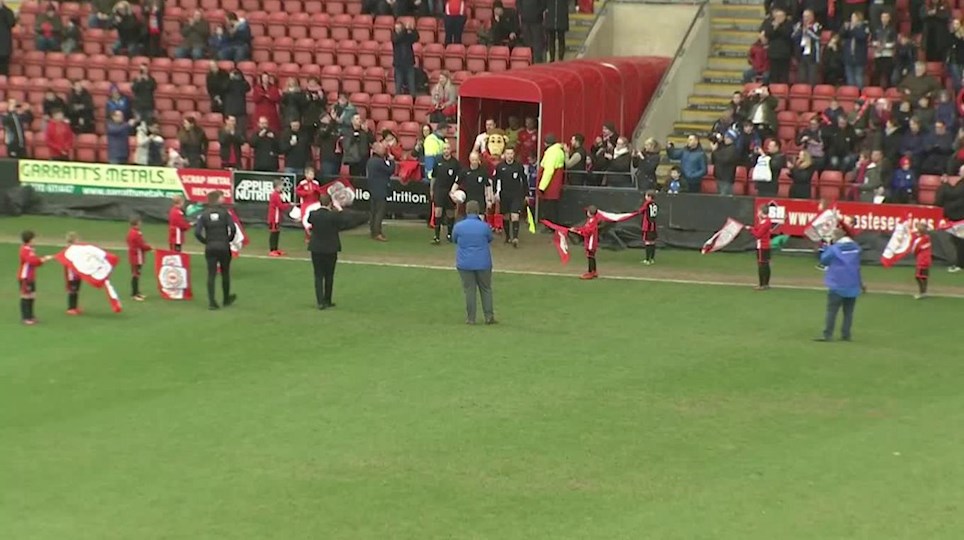 A thrilling derby game ended 2-2 after Crewe Alexandra substitute Charlie Kirk popped up yet again deep into injury time to see both teams share the spoils.

Like he was recently at Stevenage, Kirk was in the right place at the right time to tuck home a pass from skipper George Ray deep into stoppage time after he had found himself in a central position close to the Port Vale box. The centre-half unselfishly rolled the ball into the path of Kirk, who made no mistake to salvage a point against our rivals. It ignited the Alex supporters all around the stadium, who have must thought that the points were slipping away in injury time.

It was a highly eventful encounter that saw Crewe take the lead after just 7 minutes following a dreadful error from Ryan Boot who allowed a James Jones cross to slip through his gloves and Ryan Wintle stooped home to score his second goal of the season.

Port Vale hit back before the break after Jamie Sterry had fouled Luke Hannant after he hesitated when trying to clear the danger. The Vae skipper, Tom Pope, tucked home the spot kick.

The visitors' then took the lead through a fantastic strike from Anthony Kay from 30 yards on 70 minutes.His ambitious effort took everyone by surprise to hit the post and beat Garratt.

Crewe boss David Artell played his final hand by introducing Kirk, Harry McKirdy and a fit-again Chris Porter and in the closing stages it was Port Vale trying desperately to hang on to their lead. Kirk deservedly made sure we got something from a highly entertaining game with his tidy finish past Vale's reserve goalkeeper Sam Hornby, who had replaced first choice Ryan Boot in the 22nd minute.

For the visit of our local neighbours, there were three changes from the Crewe Alexandra side that lost 2-1 to Barnet on Good Friday. A slight injury to defender Perry Ng meant a change at right back with Jamie Sterry returning from injury himself to return to the starting line-up.

There was also a change in midfield with Ryan Wintle returning to the starting line-up following his cameo appearance against the Bees on Friday.

Charlie Kirk was the unlucky one to miss out on Derby Day, as was Harry McKirdy. The on-loan Aston Villa man was left out for local lad Shaun Miller, who partnered Jordan Bowery up front.

Crewe were also bolstered by the news that Chris Porter returned from injury to take his place in the squad of eighteen.

The game, as usual kicked off in a fantastic atmosphere at Gresty Road, and a frantic start Anthony Kay lay an early marker on Wintle. The referee spoke to the Port Vale midfielder when he could well have expected a booking, regardless of the timing.

Crewe were given a dream start in the derby after just 7 minutes. James Jones, operating from the right hand side of midfield whipped over a free-kick and there didn’t seem to be any danger as the Port Vale goalkeeper Ryan Boot came for it. There was no pressure on the Port Vale goalkeeper, but he made a total hash of the catch and it slipped out of his grasp and Wintle took full advantage to stoop and head home his second goal of the season. It was a horrendous mistake and had gifted Crewe the lead.

The early goal certainly injected even more confidence into the Alex and we dominated the early exchanges.

A good move from the Railwaymen saw Sterry and Miler keep the ball alive and the advanced Eddie Nolan saw his low cross gathered this time by Boot at his near post.

Boot, who appeared to be a bag of nervous after his mistake, nearly made another calamity when he allowed a cross from Pickering slip through his gloves. He was lucky, to see his defenders respond this time and Paul Green couldn’t take full advantage of the loose ball.

The referee did allow some tackles that should have been yellow cards ride but Kyle Howkins had to be booked for wrestling Miller to the floor as he threatened to break away at pace.

Crewe nearly broke away at a corner with Miller leading the charge but to his great credit, Christian Montano did superbly well to recover and make a timely tackle close to the half way line.

David Artell’s side couldn’t find a killer second goal and the visitors began to apply themselves more in the Crewe half of the pitch. They forced a succession of corners before they drew level on 35 minutes and it took another mistake.

Right back, Jamie Sterry was too laid back in trying to clear the initial danger, but he hesitated slightly and that allowed Luke Hannant to nip in ahead of him and go over his challenge inside the box. It was an error from the Crewe defender and it allowed the former Crewe man Tom Pope to step up and bury his spot kick past Ben Garratt for an equaliser.

The equalising goal lifted Vale and they finished the first half on top. Ray had to make a timely clearance inside the six yard box to make a last ditch clearance from Hannant and Michael Tonge thumped a volley wide after Ray’s header had reached him 25 yards from goal.

Saying that Crewe had a great chance to go in ahead after we broke swiftly again from a Port Vale corner.

Miller and Ainley produced a purposeful interchange of passing on the counter attack and Miller waited for the overlapping Wintle before slipping him on goal. To his great credit Hornby stood firm to make a smart save with his legs.

Port Vale introduced the extra physical presence of Tyrone Barnett at the break for Tonge as Neil Aspin’s side tried to apply some extra height in the final third of the pitch to try an unsettle Ray and Nolan but genuine chances on Garratt’s goal were few and far between.

A early forward ball from Green saw Miller rush through but Hornby came out to try and clear the danger. His sliced clearance didn’t go too far but it would have been some tall order for Bowery to direct his long distance header on target.

Kay was booked for chopping down Ainley, as was James Gibbons, and Hornby had to grasp a Jones free-kick at the second attempt after he was out under pressure by Ray.

Bowery had a difficult volley to execute from a deep cross from Sterry and being so close in it was hard to keep it down and under the crossbar.

Crewe probed and pressed trying to regain the lead but we were rocked back on 71 minutes when Kay unleashed a fantastic shot from 30 yards that smacked the post on its way past a helpless Garratt. It was a wonderful strike and Vale really had something to protect going into the closing stages.

Porter was on for Miller and Artell rolled the dice further by introducing the fresh legs of McKirdy and Kirk. Before that Ainley had a shot blocked on the line after a clever cut back from the touchline and Green had a powerful effort pushed away by a confidence Hornby.

With Crewe three up front, we went for broke. Green headed a half chance wide and it was a shame that the opportunity didn’t fall for someone like Bowery or Porter, but still we kept plugging away.

Wintle had a firm shot blocked before McKirdy was booked for a lunging tackle on a wet surface.

When Hornby made a stunning save to deny Nolan a late equaliser and McKirdy shooting straight at the Vale stopper, it looked as though the Valiants were going to enact revenge for our 1-0 win at Vale Park back in August, but there was still enough injury time for Kirk to tuck home another late equaliser.

Ray was so advanced up the pitch that it seemed to outnumber the Vale backline when Green found him, but the skipper had enough energy to find Kirk and he kept his composure to slide it past Hornby. It sparked unbelievable celebrations at Gresty Road and a point apiece was probably right.

Tickets are on sale now for Crewe Alexandra's clash with Port Vale at Gresty Road on Easter Monday.

The match kicks off at 3pm on Bank Holiday Monday, 2 April 2018, and tickets can be purchased by Crewe Alexandra supporters with their valid unique customer number.

The Alex defeated the Valiants 1-0 at Vale Park in August, and with both sides locked together in the lower reaches of League Two, the match could be an important one heading in to the final few games of the season.

If you're planning to attend the game, please purchase your tickets in advance to guarantee your seat.

Port Vale supporters will occupy both the Whitby Morrison Ice Cream Van Stand and the BMW Stand for this fixture.