Unable to make our final away trip of the season? The Alex have you covered…

Crewe head to Crawley for the penultimate game of the Sky Bet League Two Season, with both sides confirmed safely in mid-table.

The Alex are currently 17th, but can end the campaign as high as 15th with Cheltenham and Stevenage just one & two points further ahead.

After a shaky start to the campaign, the Red Devils went on a fine run over December and into the new year to pull well clear of any relegation danger. Results have since petered out, but it's still been a decent campaign for Harry Kewell's charges.

Crewe are ending the campaign on a high. Since mid-February, The Alex have won six of their 12 games, drawing a further two. That run has meant a stress-free final few games for Dave Artell, who says he may well experiment with his side in the final few fixtures.

If you're not heading to Crawley for the game, there are plenty of ways to follow the match action live and the Alex have you covered! 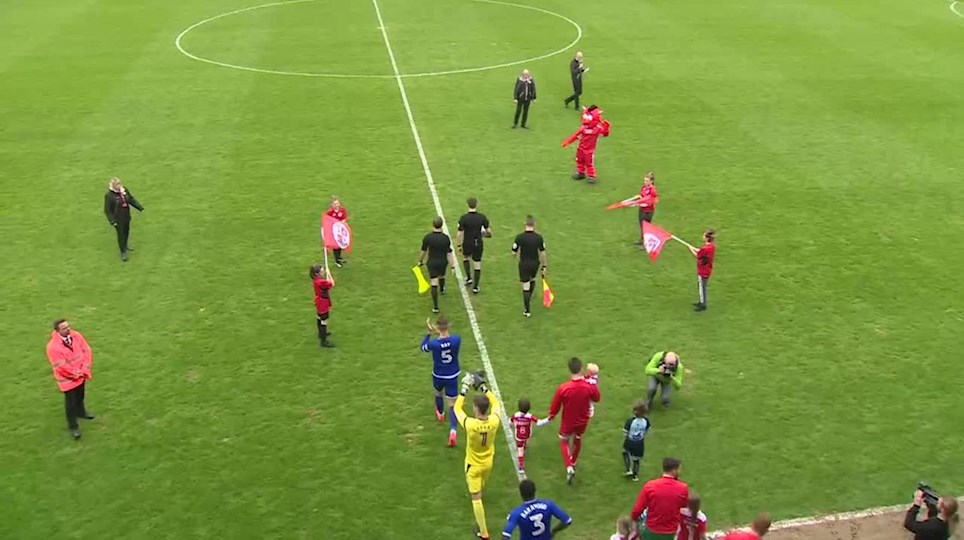 Crewe Alexandra’s final away game of the season ended in a 2-1 win at Crawley’s Checkatrade Stadium. Goals in each half from Perry Ng and Harry Pickering scored in between Jimmy Smith’s early equaliser for Crawley was enough to see Crewe move to 53 points with a home game against Cheltenham Town still to come.

Defender Perry Ng gave the Railwaymen the perfect start by calmly converting in the fourth minute, but Crawley were level inside the opening ten minutes thanks to a flying header from their captain Jimmy Smith.

Six minutes into the second half, Jordan Bowery found Harry Pickering and the youngster lashed home his third goal of the season to put Crewe Alexandra ahead for a second time. Although Crawley went close to drawing level for a second time when a header from Roberts hit the woodwork, Crewe saw out a deserved victory by standing firm.

David Artell made three changes from the Crewe side that defeated Morecambe in the dying minutes last week. The match winner, Shaun Miller, was recalled to the starting line-up ahead of Chris Porter. With the consistent Eddie Nolan and youngster Charlie Kirk rested for the trip to West Sussex, the full-backs Jamie Sterry and Zoumana Bakayogo returned to the starting XI. The defensive switch-around allowed Artell to have a look at Perry Ng at centre-half again alongside Captain George Ray. The versatile Harry Pickering moved into a midfield role on the left.

Callum Ainley was an early threat for the Alex, twice drifting past Aryan Tajbakash with relative ease down the right hand side. Ainley’s second venture into the penalty area saw him win a corner from the diving Glenn Morris. Crewe took full advantage after a low shot from Sterry took a deflection to fall invitingly into the path of Perry Ng and he tucked it comfortably into the roof of the net.

The Crawley players appealed for an offside flag that never came and rightly so because Ng looked onside when the ball fell at his feet. It was the defender’s fourth goal of an impressive season.

Crewe’s lead lasted for just four minutes as the home side hit back in the 9th minute. Lewis Young’s cross from the Crewe left was touched on by Thomas Verheydt and Jimmy Smith flew in at the far post to head past a helpless Ben Garratt. A lively game had already seen two goals and plenty of action at either end of the pitch.

After Sterry had contested a header close to the half-way line, Miller’s quick touch into Ainley allowed the youngster to get the ball out of his feet and whip over a cross that Bowery was a touch unlucky not to head on target. He met it well enough but it sailed just over Morris’ crossbar.

At the other end, Grant had a shot from the edge of the Crewe penalty area blocked by the well positioned Ray. The towering Verheydt curled one into the gloves of Garratt after creating a yard of space for himself, but it was never really going to test the Crewe number one.

After the early frenzy, the game was, as expected, going to settle down and have a bit of lull. Both teams continued to play some good possession football though but that final ball or cross was just lacking the quality that was shown in the opening 20 minutes.

It was defences on top as we entered the last few minutes of the first period. Zoumana Bakayogo started to make some overlapping runs from his left back position and after winning a corner, Ray just couldn’t rise tall over to get a firm connection with Ainley’s deep cross.

In the opening couple of minutes of the second half, a wicked low cross from Sterry appeared to get a slight touch from Ainley but Bowery just couldn’t quite reach it at the far post. It had been such a tempting cross from the on-loan Newcastle defender and it only needed a decisive touch from the Crewe front man.

Crewe had switched Ainley and Pickering over to make sure they paired themselves up with the same full-backs as the first half and after a swift counter attack on 51 minutes, we regained the lead. Bowery fed Pickering and his determination to head for directly towards goal, saw him fire past Morris and into the opposite corner of the Crawley net. It was a wonderful finish from Pickering who registered this third goal of the season with his right foot.

The Pickering goal injected even more confidence into the Crewe side and Ainley was denied a third goal after a superb run and shot. His powerful drive was saved by Morris and at that point had kept the home side in the contest.

In response, Crawley’s full-back Young got in behind Bakayogo after he unfortunately slipped at a crucial moment and the Crewe defender had Ng to thank for shuffling along to cut out his low cross. Josh Payne also shot rather tamely at Garratt after Crawley thought they had a legitimate case for a penalty but in truth it was a fantastically timed tackle from the recovering Green.

Kewell made a double substitution on 64 minutes with Jordan Roberts and Panutche Camara replacing Tajbakash and the tiring Verheydt.

Five minutes later, and his confidence high, Ng hit an ambitious free-kick on target from 30 yards that Morris did well to hold. Any mis-handling would have dropped to Bowery.

Moments later, Crawley almost drew level when Roberts’ looping header struck the woodwork and they couldn’t force the rebound home mainly because of the determination of Ray to give it out.

Crewe made their first change with 18 minutes left on the clock with Porter replacing Miller.

The Railwaymen continued to press, aiming to secure the killer third goal. Kewell’s Red Devils kept going too, aiming to find a second equaliser of the game.

Crewe were standing firm though and defending our box with real purpose. The lively substitute Camara saw a shot blocked by the excellent Ng and Ray got his head on most things as the home side started to load our box.

Sub Porter so nearly squeezed home from a tight angle but again it was a smart save from Morris.

With the minutes ticking away, Artell changed Kirk for Ainley. With a spirited Crawley trying desperately to find that equaliser, Crewe broke superbly in stoppage time to release Porter but he was again denied by Morris and Bowery couldn't connect with Kirk's pull-back.

Crewe showed great game-mangement in the four minutes of injury time to see out the game and collect the three points.

Crewe Alexandra travel to Crawley looking to end the 2017/18 away campaign with victory.

It's the final away trip for the Alex of the season and Dave and the boys will be looking to end on a high after an upturn in results on the road in the final months.

Crawely went on a fine run from December to February to ensure themselves safety, but have since gone off the boil.

Tickets are available now from the Alex ticket office.

Tickets will be on sale until 3:00pm on Friday 27 April, subject to availability.

Official coaches depart from Gresty Road at 08:00am and are priced at: