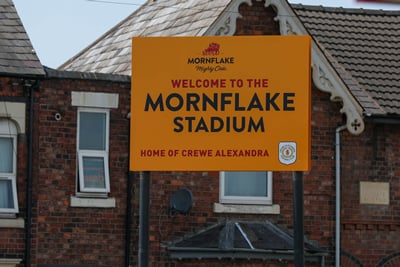 Over the last ten years, Crewe Alexandra's Gresty Road home has undergone some drastic and much needed changes. To comply with the Taylor report of 1990, the stadium became all-seater prior to the start of the 1999/2000 season. The impressive new main stand, which officially opened in August 1999 increased the overall capacity to just over 10,000.

Costing in the region of £6 million to complete, the Main Stand finally concluded all the main areas of ground improvement.

The first area to undergo redevelopment was the decaying Railway End of the stadium. In 1992, this area was dramatically transformed into an all-seater area for families. The seating capacity of 638 also provided an extra fourteen spaces for wheelchair users and their carers. The construction of this stand also incorporated an upstairs suite, thus allowing supporters to enjoy a pre-match meal and host seminars and meetings.

A number of seats for the partially sighted and their carers are available where via the Hospital Broadcast Unit a full commentary of the game is available by using the headphone units situated at that end of the ground. The Andrew Connolly Stand will be used on some occasions by away supporters. This has been agreed by the club to satisfy the demands of travelling support in the First Division. This will only operate for certain high profile games.

Previous to 1995, this uncovered area of the ground was reserved for away supporters and needed improvement to cater for the visitors of First Division clubs. With a capacity of 996 this arrangement lasted until August 1999 when the behind-the-goal stand was given back to Crewe Alexandra Supporters. The popular Gresty Road, provides the best singing atmosphere on a matchday and can also cater for 7 disabled supporters and their helpers. Local firm Rhino Safety Stand are the  official sponsors of the Grsty Road End.

In an attempt to increase room for away supporters they were relocated in the more spacious The Whitby Morrison Ice Cream Van Stand, which holds around 1,600 supporters - this arrangement still stands today. Development on this particular area of the ground also began in 1995 and finally ended years of standing on the old 'Pop' side. During the close season of 1998 the new floodlights were installed along with a complete electrical upgrade of the Stadium.

The Whitby Morrison Ice Cream Van Stand is also home to the newly refurbished control room, the base for the safety officer and our closed circuit television system and PA system. The Main Stand At the end of 1998, the redevelopment of the south area of the ground began which culminated in the building of the magnificent Main Stand, which was completed and ready for use by August 1999. Underneath the main stand we now have all our administration offices, club shop, and ticket office area.

There is also a spacious lounge, guestroom and boardroom, which are all used on a matchday and for non-footballing events. The completion of the Main Stand also saw new dressing rooms, a treatment room, doctor's room and officials room constructed, as well as a player's lounge and the  manager's matchday office.

There is also space for 65 home disabled supporters with wheelchair access and a lift facility available. The stadium now boasts some of the best facilities in the Football League and along with the newly control room and PA rooms.